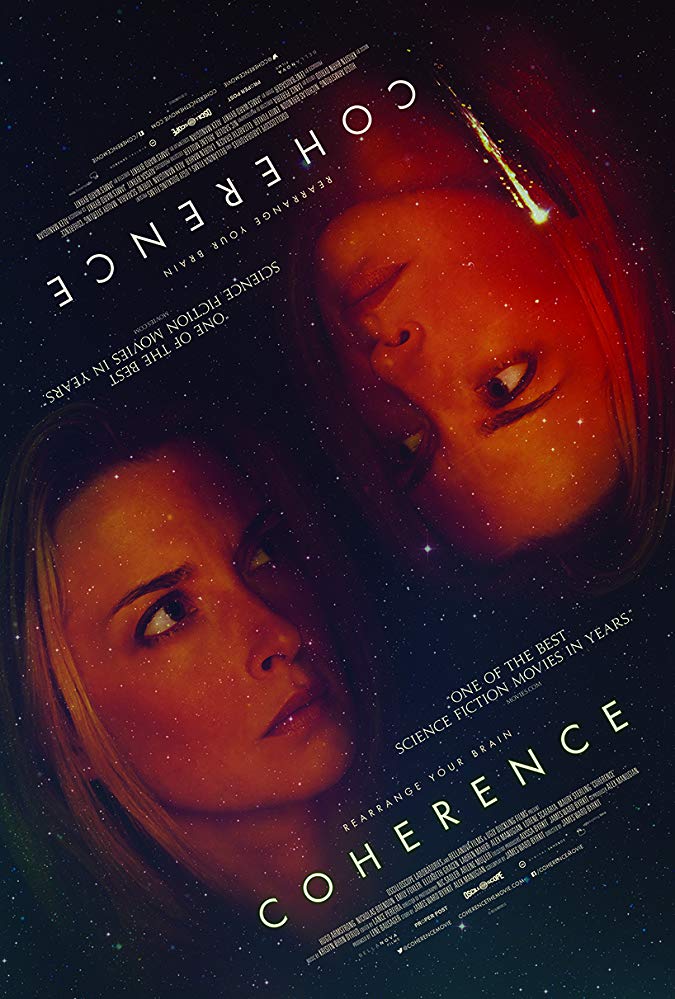 Coherence is a 2013 science fiction movie, but I'd wager that the term horror could be applied just as well. A great sense of foreboding and dread permeates the entire film. The movie is the directorial debut of James Ward Byrkit, also known for his work writing the Oscar-winning animated film Rango and serving as a conceptual artist for the original Pirates of the Caribbean trilogy.

In interviews, Byrkit explains that Coherence was his attempt to separate himself from the Hollywood machine. He wanted to make a movie without a script, without a crew, and with little resources. Filmed for under $50,000, Coherence is a film that is much greater than the sum of its parts. The movie was filmed almost entirely within the living room of Byrkit's own house, utilizing actors well-versed in the art of improvisation. The science-fiction aspect of the story was borne from an attempt to make this living room feel much larger; an interesting approach to expand what is mostly a single-set film. As an aside, I've covered several other single set films on this site previously, including Last Shift and Alien Raiders.

The story begins as eight friends come together for a dinner party in a quiet suburb of California. The gathering happens to coincide with the arrival of Miller's comet. There's some exposition about the last time the comet passed by the Earth in the early 20th century when there were reports of radio interference and mass confusion. We learn that this time the comet's orbit will bring it into much closer proximity with the planet, setting the stage for the strange events that begin to unfold. I won't go into the story much more than this. Do yourself a favor and watch Coherence with as little prior knowledge as you can. Heck, feel free to come back to this review later.

The main character is Em, played by Emily Foxler. She is joined at the party by her boyfriend and three additional couples. Em is a professional choreographer and dancer, and, it is explained that a series of bad decisions resulted in her missing out on performing a dream project. Her relationship with Kevin is also on the rocks, evidence by Em's hesitancy to commit to accompanying him on a four-month work trip. Not helping matters is the presence of Laurie, Kevin's ex-girlfriend who also wants to get back together with him. Each of the eight characters is flawed in some way and, without spoiling anything, the film is ultimately about the rippling consequences of the decisions we make. Albeit, with a heavy science-fiction flare.

The dialogue through the early part of the film is natural and flowing, a welcome effect of filming with no script. Brykit says that on every day of filming he provided each actor with a series of 5 points that he wanted them to convey throughout that day of production. These points were not shared with the other actors beforehand, and so were naturally woven into the improvised dialogue. That said, Coherence is a complicated film, one that is trying to convey a (very) complex narrative. While everything in the film is serviceable, I can't help but think that some of the more exposition-heavy plot points could have benefited by more subtle conveyance. Any such lighter touch definitely would have required more scripting.

This isn't to say that the filmmaker relied solely on the improvised performances to create the narrative of Coherence. Brykit spent the better part of a year developing the backstory of the film, piecing together outlines for scenes and thoroughly tracking continuity. The resulting 12-page outline was used to keep the actors oriented and the narrative moving forward. There is an incredible attention to detail present here, layers upon layers that can only be appreciated on repeated viewings. There are few movies that I've seen that approach the mind-bending nature of Coherence, and fewer still that have done it this well.