Alien Raiders (2008) is an entertaining, low-budget, alien-infestation flick owing much of its plot to John Carpenter’s classic remake, The Thing. The biggest factor working against this film is its generic title, leaving the would-be rental customer with the distinct impression that this film might have been made as an Asylum or SyFy channel original. 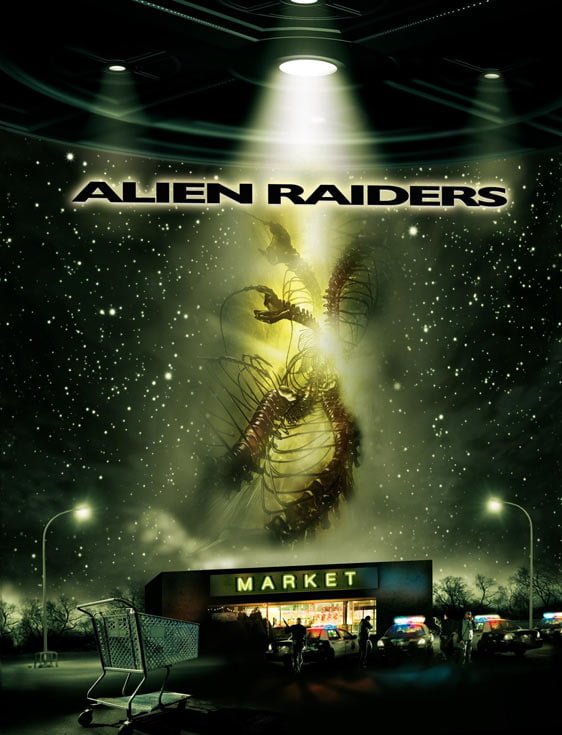 Don’t get me wrong, I love Mega Shark vs Giant Octopus as much as the next guy, but its the sort of film that you watch when you’re still waiting for Netflix to ship out your latest batch of celluloid goodness. With a title like Alien Raiders it would be easy to assume that this film shares a similar heritage whose results could only be described as dubious in quality. However, if you can overlook this unfortunate first impression and still happen to pick Alien Raiders up off of the rental shelf, I can assure you that you will likely be rewarded for your 85 minutes and the minimal monetary investment.

The premise is simple; a group of armed gunmen storm into a small-town grocery market and quickly announce their intentions to rob the place. Something is immediately amiss, as instead of taking the money and leaving, the gunmen take the customers hostage and chain up the exits. The situation quickly escalates when a small-town cop takes it upon himself to draw his gun and take out the gunmen, but not before notifying the local precinct. The cop is quickly subdued, but the police show up outside and we have the beginnings of a standard bad guy-cop negotiation plot-line.

Not exactly sounding like an alien-infestation movie yet, is it? It’s an interesting set-up at a glance, definitely a refreshing approach to a film of this type. Story-wise, it turns out that the gunmen have no intention of robbing the market, but are instead searching for people infected with an alien parasite. Given that the alien host looks like a normal person, there is no knowing who is and who isn’t infected, so the gunmen set out to test each and every customer in the store. It’s a lot like The Thing, although the test is a bit more gruesome. I also appreciated the added intellectual element of the hostages versus the gunmen. In the early portions of the film, the audience identifies more closely with the hostages. We feel what they feel- maybe, just maybe, there are no aliens and  the gunmen are simply insane.

The film is competently made, but the low budget does begin to show in the special effects. Luckily, the movie is smartly scripted and the effects shots are actually rather sparse. Oddly enough for a genre film with such a campy title, Alien Raiders unfolds as more a slow-burn and is a better film for it. One choice affecting both aesthetics and story was having one of the gunmen run around with a camcorder. Some of this footage is interspersed into the movie proper, providing brief low-fidelity glimpses at the frequently chaotic proceedings. This same mechanic also serves to provide some back story. Although this does make for some interesting visuals, having a hostage taking, gun-wielding bandit running around with a camcorder is an odd choice from a story standpoint.

There aren’t any stand-out performances from the main protagonists, but all of the actors are perfectly well-suited to the material they’re given. Given the background of the gunmen as explained in the film, I thought the characters weren’t written in a way that properly reflected their origins. This is not an issue with the acting, but rather scripting and maybe casting. I understand the desire for the gunmen to come across as some serious bad-asses, which they do, but this does not mesh well with the background they are given.

The Bottomline: Alien Raiders is an entertaining, low-budget film that offers some new twists on the standard alien-infestation storyline. Some scripting inconsistencies might rear their ugly heads, but overall it’s a solid rental. If you can get past that ridiculous name.