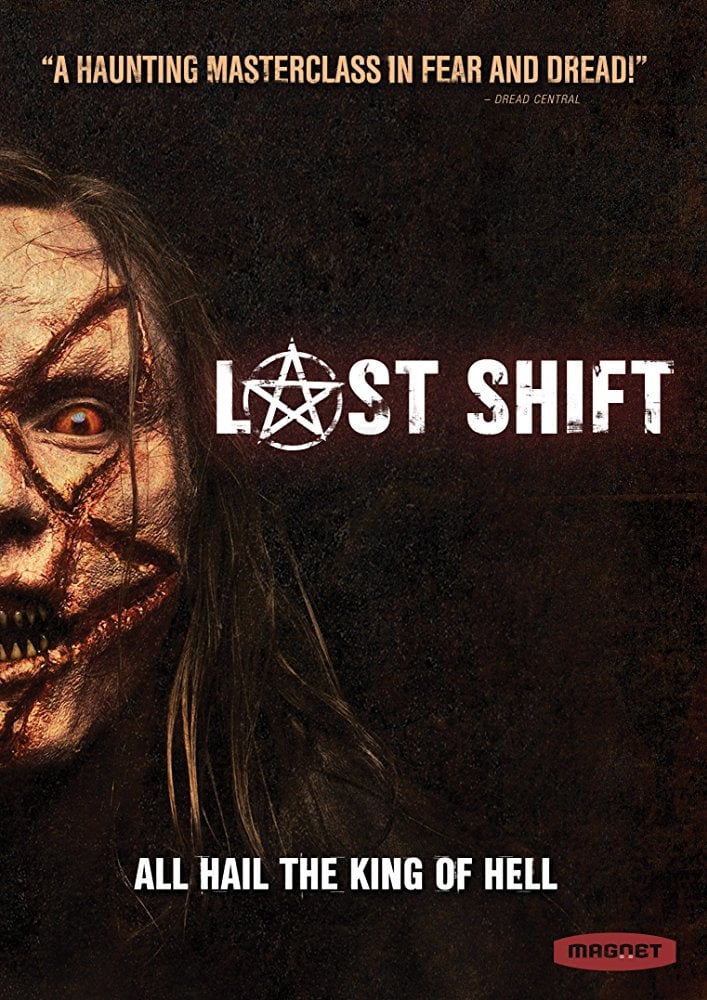 The Pick: Netflix got me again with their short, 30 second looping trailers with the pumping, genre-appropriate music. I was further intrigued by the face of the man or creature that appears on the cover art for the film. The satanic overtones proved to be too enticing, and Last Shift ended up playing on my television for this, the ninth night of Shocktober 2017.

The Film: Directed by Anthony DiBlasi, Last Shift tells the tale of Jessica Loren (Juliana Harkavy), a rookie cop assigned to watch over a decommissioned police station on its final night of operation. During the night, Loren is anticipating the arrival of a Hazardous Materials team to dispose of some leftover evidence. On the surface, it's a straightforward task and Officer Loren is given only one directive by her superior; do not leave the police station.

As the night begins, Loren finds the police station to be empty and quiet, as would be expected given the situation. Loren is surprised by the sudden intrusion of a homeless man who promptly urinates in the lobby. After moving the man to a holding cell, the night begins to further unravel. An emergency call is received at the station, despite having been told that all such calls have been rerouted to the new station. Chairs begin to move; closed doors are found open; and lights in the back of the station are found turned on. And then, there's the soft, ghostly singing that seems to waft forward from the deep, dark recesses of the station.

Without going into spoiler territory, the story told in Last Shift is engaging and tightly wound. DiBlasi competently uses an array of psychological thriller elements that certainly kept me engaged with the story. The film feels small and quaint; the single location of the police station is isolated and claustrophobic in the ways that the settings of many good horror films are.

Further. as the sole character on screen for much of the film's run time, Juliana Harkavy does an admirable job remaining engaging and believable in her role as the beleaguered Officer Loren. The mature sensibilities of this character is key to the film's success, especially as the supernatural elements continue to pile up, and we see the toll of the night's events on Loren's frame of mind.

Last Shift is a slow moving film, but one which uses its single location and atmosphere to its advantage. The supernatural elements of the story are used to good effect, creating an unsettling tone which only becomes increasingly disturbing as the events of the film unfold. The few special effects in the film are well used, and the late-film make up effects are suitably unnerving and horrifying. The less that you know about the story going into the film, the better I think you will enjoy it.