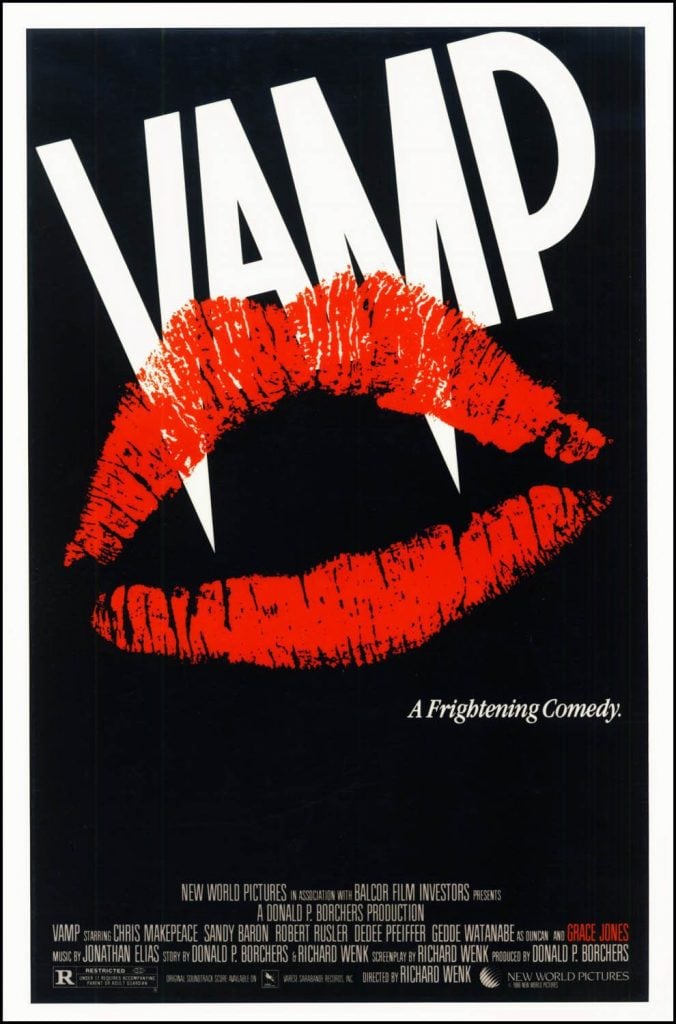 I can remember Vamp from my childhood. No, I didn't actually see the film when I was a kid, but I do remember it being listed in the TV Guide, schedule to play during a late night time slot on one of the premium movie stations. To this day I can remember reading the listing as a teenager and being tempted to set my alarm for early in the morning, tempted to sneak downstairs to watch on the family television. In my defense, the promise of both vampires and strippers contained within a single film is almost too awesome for a thirteen year old boy to ignore.

I remember the box art on the shelf at the local rental store, the cool fluorescent lights glaring off the clear plastic sleeve covering the VHS tape. I may not have known the exact content of the film, but there was something about that lipstick kiss on the VHS box that told me this film was naughty. Despite renting countless R-rated horror movies, I never could work up the nerve to bring this one to the check out counter.

So why do I mention, at great length no less, my personal history of admiring but never actually watching this film? I think it's to impress upon you the feeling of nostalgia that overcame me while watching this film. While I possess no previous knowledge, or therefore love, for the film, I still felt an incredible affinity for its content. Vamp is the sort of film that, even if you've never seen it, might still hold some value if you grew up during the right period of time.

The film is a product of its time, a combination horror film and teenage sex comedy. It vaguely reminds me of a John Hughes film but with vampires, a feeling no doubt reinforced by the presence of Gedde Watanabe from Sixteen Candles. All of the characters are incredibly rooted in late 1980's culture, from their dated costumes and hair to the slightly too old actors portraying them. Still, the movie is sharply written and ably acted. The two male leads are fun to watch as they engage in snappy, rapid fire dialogue. Robert Rusler in particular is extremely watchable here, and horror fans will recognize him as Grady from the earlier A Nightmare on Elm Street 2: Freddy's Revenge. Also deserving mention is the undeniably cute Dedee Pfeiffer who gives a strong performance while wearing her tiger-striped leggings and zebra-print jacket with pride.

The plot of the film almost seems like a predecessor of sorts to the Quentin Tarantino written/acted vampire-stripper opus, From Dusk 'til Dawn. As part of their initiation, two college buddies are tasked with traveling to the Big City (which one? I don't know) and bringing a stripper back for entertainment at a fraternity party. They borrow a car from the rich kid, played by Gedde Watanabe, and make their way to the After Dark Club. The boys quickly outstay their welcome, discovering first hand that this wannabe bordello is actually staffed by bodacious vampire stripper babes! Needless to say, the protagonists go on to have a pretty bad day.

For a film focused on obtaining the services of a stripper, there's surprisingly little nudity in the film. Although, that's not to say that scantily clad vampires don't fill the frame for a good portion of the film's ninety-three minute runtime. Most times clever costuming hides the naughtiest of naughty bits, leaving the film with only a few bare breasted shots. Rest assured, there are plenty of flat 80's asses on display though. Most perplexedly, the head vampire stripper is played by the androgynous yet striking Grace Jones. I can't be sure how it played back when the movie was first released, but her main-stage strip show doesn't even begin to approach the adjective we now know as 'sexy.' It's even more odd to watch the strip club patrons within the movie applaud her act, as though they were watching a different show than we, the viewers, were privy to. Story-wise, I'll just attribute it to her otherworldly vampiric allure and move on. I also appreciated the sarcophagus and other assorted Egyptian imagery. It suggests a much deeper back-story in regards to the origins of these vampires, even if it is never directly addressed.

There's not much here in terms of gore or creative deaths, but a few people do get munched on and a few vampires do get staked or burned. There are a few action sequences, car chases and the like, and the budget is clearly being stretched in those sequences. But really, special effect aren't the driving force of this movie. The fun teen flick atmosphere and constant tease of probably nudity makes this a schlocky if somewhat hollow good time. The charisma of the lead actors will probably be the deciding factor for you, and I found their performances to be engaging right from the opening scene.

The Bottomline: My experience with Vamp was a fun, nostalgia-fueled celebration of a begotten time in cinema. My only unfulfilled wish is that I no longer have the chance to take the suggestive cover art and slap it down on the counter at the local rental store.