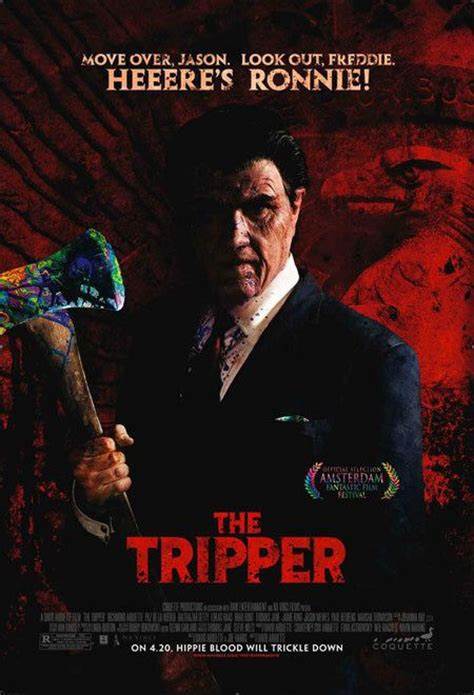 The Tripper is the directorial debut of David Arquette, husband of Courtney Cox, star of several fun horror b-movies movies including the Scream Trilogy and Eight Legged Freaks, and former WCW Heavy Weight Champion (really). Considering his involvement in the independent film scene I figured he'd have a good handle on how to make a fun, low budget slasher flick.

Boy was I wrong.

The movie is pretty much a train wreck from start to finish. The biggest problem turns out to be Arquette himself. I don't have many complaints about his direction. Arquette seems to do a passable job, keeping the camera moving and composing interesting shots and angles. My biggest issue is the writing.

The story surely sounds interesting. A young boy, Gus, growing up in the late 1960's has the Reagan pro-war rhetoric bombarded into his little brain until an incident involving a pack of (literally) tree hugging hippies ends with bloodshed. Cut to 40 years later and a group of drugged up hippies are heading out into the middle of nowhere to attend a Woodstock-like music festival. The young boy has grown into mentally disturbed man and the presence of all these hippies drives him over the egde. Donning a nice, pressed suit and casting a striking resemblance to the late former President, Gus takes to the woods to make those hippy bastards pay, spouting clever Reagan-esque quips along the way.

Like I said, it sounds good. I, for one, love a little socio-politcal commentary in my horror flicks from time to time. George Romero was a genius at this game. David Arquette, not so much. The first problem? None of the characters are likable. The drugged up hippies are one dimensional stereotypes in the worst possible way. They literally have no purpose in the film other than show up, do drugs, and die. All of the non-hippy characters are portrayed as deep south red neck hicks who do nothing but make life miserable for the hippies. Even the sheriff assigned to provide protection at the event doesn't believe the hippies when the shit hits the fan because he dismisses them as drugged up idiots. Simply put, there isn't a single intelligent, likable character in the movie.

The other problem I have is that the killer's motives just don't make any sense. He's clearly supposed to be a caricature of Ronald Reagan. This being the case, you would expect the character to carry some heavy ideological ideals. You know, kill with a purpose. Myself, I expected that the killer would focus on killing hippies and he'd make a point of leaving the conservatives alone. Not so. The killer is surrounded by the liberal hippies and the conservative red necks and kills each indiscriminately. In fact, he kills a rather large number of red necks around the midpoint of the film, without any rhyme or reason. Later in the film, the sheriff is asked "What do you think [the killer] is after?" The reply, delivered with what I suppose was supposed to be stylized action bravado, is, "Hippies." Apparently David Arquette didn't watch the movie he was writing because, for this line to make any sense, the killer would have to of followed a basic rule set up to this point in the movie, which he hasn't.

So as not to sound all negative, the movie does have a pretty massive massacre scene towards the end where old Reagan goes postal on a huge crowd of hippies. The body count throughout the entire movie is pretty high too, although almost all are dispatched via an ax. The massacre would be more impressive if the special effects weren't so plain jane. I've seen better gore in movies shot by a bunch of teenagers on 16mm celluloid.

Tie all of this together and you're left with a real yawner of a film. The kills are repetitive, there's no suspense, and the characters are all annoying. To top it all off, despite the premise, there's not even a cohesive socio-political message delivered by the film other than "Reagan was the bad." Sorry Dave, you're just going to have to try harder next time.

The Bottomline: David Arquette has crafted a pretty average slasher flick. The sheer novelty of watching a Ronald Reagan look-alike dispatch hippies is worth an extra star, but that's about all the film has going for it. The Tripper isn't unwatchable, it's just not very good.