Oh man, here we are yet again. #SHOCKTOBER, am I right? This time, I have to come up with a bunch of words to put in some sort of order to talk about Movie #12 of my October Horror Movie Challenge, Tremors 5. Stick around and see whether or not the latest installment in this long running franchise is worth its 99 minute runtime. 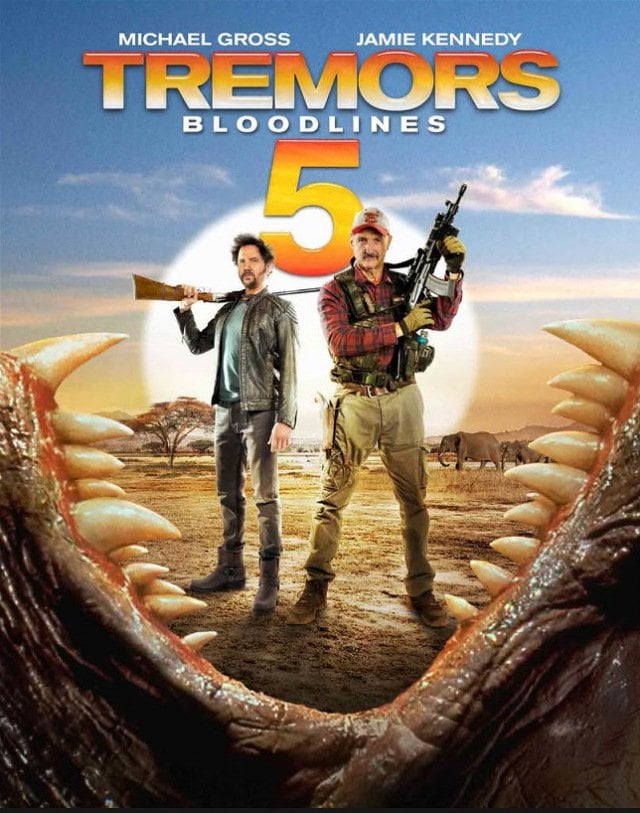 I’m not going to lie, I knew when I heard that there was going to be yet another Tremors film and that it would once again star Michael Gross as everyone’s favorite globe-trotting, gun-loving monster hunter, Burt Gummer, that it was going to be less than great. Nevertheless, I also knew that I was going to have to see this film. I love Tremors, the first film, as it is one of the best examples of a modern dumb, fun creature feature. I say modern, but of course it has been 25 years since the original was first released. Actually, just a quick peek over at IMDb… oh, man. Tremors 4 was released in 2004! Even the most recent installment happened over a decade go!

That said, Kevin Bacon and Fred Ward really hit it out of the park in Tremors, and it is that good will that continues to propel me through every installment of the series, including the abysmal TV series. Despite being only a bit part in the original film, it has been the Burt Gummer character which has been the constant in the entire series. The character is likable enough, but I’ve always sort of hoped for the return of Fred Ward, whom last appeared in part 2, or Kevin Bacon, which is, of course, never happening. But a mad doctor can dream, can’t he?

Anyway, this film picks up with Burt Gummer being solicited to go Graboid hunting in Africa. For those just joining us, a Graboid is the official name of the underground, worm-like monsters of the series. They are named for the three retractable, snake-like appendages that come out from their mouths, grabbing their prey and pulling them into the larger creature’s gaping maw. Burt has a new colleague, a videographer that is looking to remake the Burt Gummer brand and turn him into an international icon. Hijinks ensue.

The movie is mostly fine, but I had a few disappointments. Despite being the true big baddie, the Graboids play a much diminished role in this film. The majority of monster screen time is given up to the sophomorically named Assblasters. The lore of the series in complicated, but, basically, the Graboid worms give birth to small, ground walking monsters called Shriekers that can see with infrared vision. In turn, Shriekers mate and give birth to Assblasters, creatures that are primarily teeth and wings and which fly by emitting a noxious chemical mixture that causes flames to erupt from its rear-end.

Anyway, these subsequent stages of the Graboid life cycle were introduced in the subsequent films, and have always made me like each of those films a little less than the movie previous. There’s just something pure about giant tunneling worms with retractable snake mouths that ass-blasting offspring ruin for me.

Yeah, I just typed that sentence.

At any rate, I consider the increased screen time of the Assblasters a negative for this film over all. The one true Graboid that appears in the film is somewhat cool, and they introduce some interesting ideas that suggest that the creatures are evolving based on their environments at a highly accelerated rate. In that regard, it’s nice to see that the filmmakers aren’t afraid to mess with the existing formula, and it definitely keeps the audience on their toes. Still, I’m fairly certain that they only had the money to animate one sequence of the Graboid, a relatively cool moment where the Graboid bursts out the ground, leaping like some sort of sand-based killer whale, spinning in a corkscrew as it soars through the air. It’s a cool animation, but I’m fairly certain they reuse it no less than 3 times throughout the movie; kind of a bummer.

Maybe we’ll get another one in less than 11 years this time?