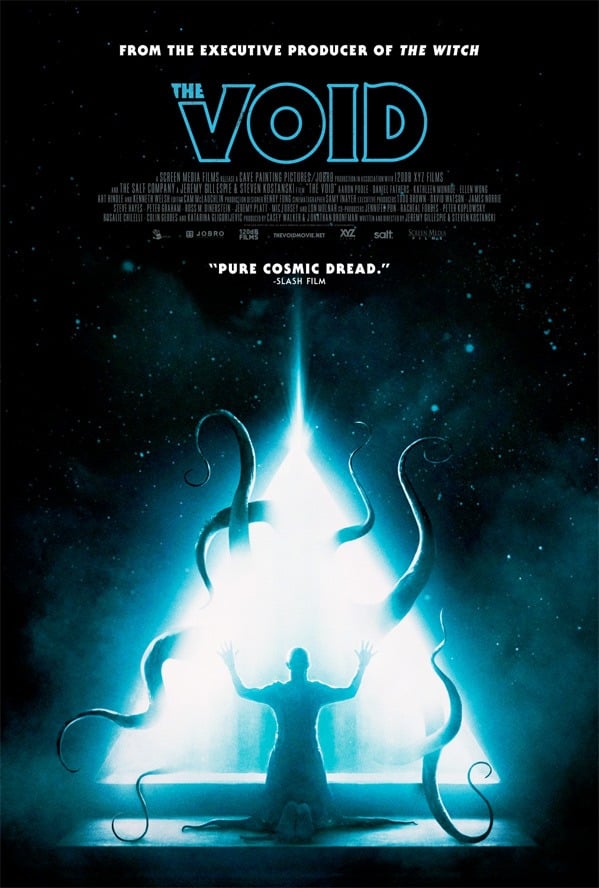 The Pick: I found The Void on Netflix as I was flipping through, looking for Shocktober films. I quickly fell in love with the poster art; who doesn't love the promise of tentacles in their horror movie? Further, the backdrop of space hinted pretty strongly to me that I was in for some sort of cosmic terror story line that would likely do H.P. Lovecraft proud.

The Film: Written and directed by Jeremy Gillespie and Steven Kostanski, The Void is clearly a labor of love. This is a low budget film that feels like a million bucks in terms of its scope, visuals, and practical effects. Interestingly, the film was partially crowdfunded on Indiegogo, where it raised $82,510 to help support its creature creation efforts. I couldn't find any records on the total budget of the film, but I find it unlikely that this crowdfunding was the sole source of financials for The Void, as  its entry on Wikipedia seems to imply. The film is simply too well produced to have not received any additional funding.

The story begins when small-town police officer Daniel Carter (Aaron Poole) comes across a badly injured man limping down an old backroad. Carter delivers the unknown man to the local hospital, where his ex-wife Allison (Kathleen Munroe) works as a nurse for the kindly old Dr. Richard Powell (Kenneth Welsh). There is an additional small cast of characters present, including Nurse Beverly, intern Kim, a pregnant girl and her grandfather, and patient Cliff. Not long Carter's arrival, the hospital is surrounded by a group of mysterious hooded figures, who seem bent on not allowing anyone to leave. Without giving too much away, the group inside the hospital soon discover that the hospital is also inhabited by slimy, tentacled creatures, and the race for their survival is on.

In terms of overall feel, I was reminded of John Carpenter's The Thing in several respects. The understaffed hospital is isolated and, although this film is not set in Antarctica, it becomes quickly apparent that our group of protagonists are just as effectively cut off from the outside world. Like Carpenter's classic, claustrophobia permeates this film, building an excellent sense of dread. Thankfully, Gillsepie and Kostanski never veer into spoof territory, and The Void is played completely serious and deadpan.

As a final comparison to The Thing, The Void is full of the moistest practical creature effects that any horror fan could ever want. The majority of effects are done in camera, and look phenomenal. The camera work isn't trying to hide anything, and there are a good many long, steady shots of the creatures on display. You might be able to accuse them of intentionally under-lighting some of the effects, but given the overall confidence in their effects on display, I am personally happy to forgive this slight transgression.

Horror genre fans will likely be pleased by The Void. It is not often that cosmic terror is depicted on film, and rarer still when these films are as well-made as is this one. The claustrophobic setting and the gratuitous creature effects kept me occupied for the film's duration, and I was left wanting more by the time the story came to its end. I don't think you can ask for much more from a film.