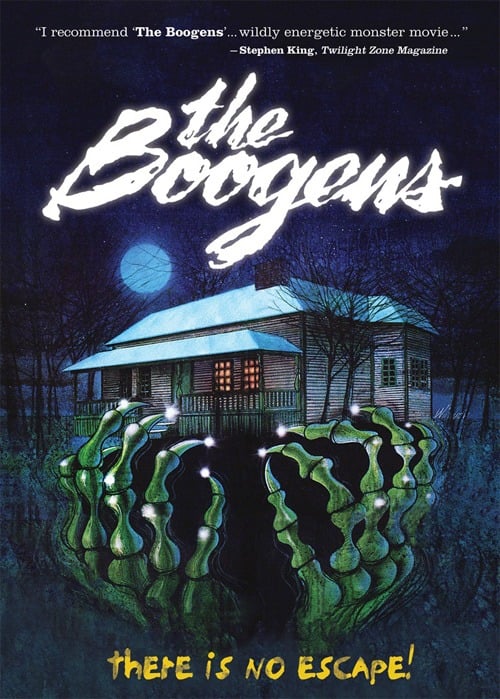 Here we are, 7 days into the October Horror Movie Challenge. Tonight's film is a creature feature from 1981, The Boogens. I don't really have a good explanation for why I chose this film, I simply felt like I'd seen the title and poster in enough places that I finally had to sit down and see what the Boogens was all about. Also, that name is just fun to say. Boogens.

Let's just take another look at that poster art. Look at it! Look at those wiggly, boney hands clawing up at the house! Who knows what horrors await the people that we suppose are inside! I know this probably dates me, but I cannot look at  this art without feeling waves of nostalgia for the VHS rental stores of my childhood. It's an experience that I look back on rather fondly, tip toeing my way through the horror aisle, only half daring to look at the boxes for fear of glimpsing something that would give me nightmares.

Looking back, there are many boxes that I can vividly remember sitting on the shelf, daring me to rent them. It was always a roll of the dice as to whether any of what was depicted on the box would actually be depicted in the film itself. Often, the art would have little or nothing to do with any scene in the actual movie. I think Ghoulies is probably the worst offender of this; the monster coming out of the toilet on the cover appeared nowhere in the film but became so iconic that the filmmakers had to put such a scene in the sequel. Ah, memories.

Anyway, back to The Boogens! A mining company is planning to reopen a long-closed mine in a small mountain mining town. Yeah, the mine is central to the plot of the film. This film's version of Crazy Ralph attempts to persuade them to leave the mine closed, but of course no one listens to him. As you can guess, opening the mine unleashes the Boogens! Well, unleashes a Boogen, I guess. I mean, they say there are more than one, but they never really show more than one during any single scene of the film. I guess we should take the characters at their word and presume that there are in fact an army of Boogens infesting the mines, but, sadly, we the audience will never quite know for sure.

The film mostly revolves around two guys who work at the mine that want to get laid as their girlfriends come to visit for the weekend. Also, one of the girls brings a dog. One of the guys is a terrible, sex-obsessed caricature, while the other guy also ends up having sex, but with the other girl. You'll have to excuse me, as I sort of forget which guy is which, but rest assured one of  them dies and the more well-rounded one plays hero, blasts the mine shut with a bag of TNT (yes, a bag of TNT), and lives. I'm not sure what kind of morality play is on display in the  Boogens, but there you go. That's basically the whole plot.

Oh, one of the girls dies. And so does her dog. Sorry, I know, that's probably kind of hard to accept, but it was the 80's and this was a time when children and dogs still sometimes died in movies. Don't worry, though, the other girl makes it out OK!

This brings us to the monsters. Take another look at that poster. Sadly, those bony hands don't really ever come into play in the film itself. These, uh, "monsters" are sort of turtle-like mutants with tentacles. Also, the tentacles have a single claw on them? But sometimes the tentacles have a mutant baby hand with claws on the end of it? I can't say I'm an expert in Boogen physiology, but I'm really rather unsure that they have any sort of long, wavy bone hands like shown on the poster. Also disappointing, the term "Boogens" is never actually said in the film itself.

Despite failing to fulfill the wavy handed terror promised by its poster, The Boogens still manages to entertain. It's not great cinema, folks, but there are worse horror movies from 1981. I mean, at least, I assume there are.