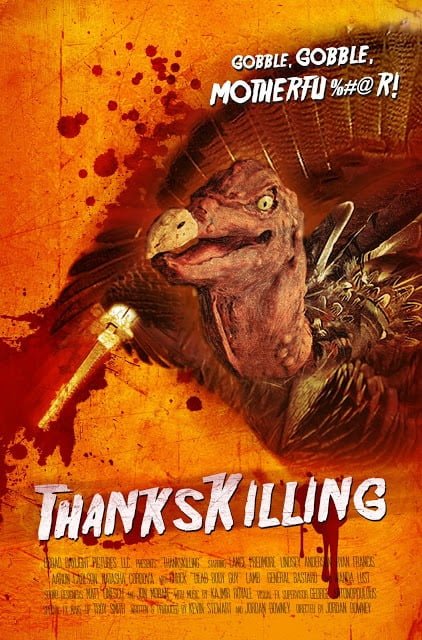 In honor of the impending holiday, the Geek has chosen for review the 2009 low-budget release ThanksKilling. You know to expect great things from a movie billed as the ultimate in low budget horror, but I was not ready for what I experienced the moment I pressed play on my Netflix Instant Streaming media player.

Don't get me wrong, this is not a movie that any one will ever put on a list of their favorite films of all time. This isn't even going on any lists of must-see so-good-it's-bad films. Still, for the entire hour and seven minutes the film lasted, I was entertained by the sheer lunacy of the proceedings.

The film's opening is tits. Yes, literally, the film begins with a lingering shot of a lone nipple on a large breast. Normally this would be a positive for a B-movie, but sadly the quality of this breast is below the standards of what I expect from modern indie cinema. Back in the 1980's, you would frequently come across nude actresses who really ought not be nude. This opening scene reminded me of this staple of a long forgotten era, as the older blonde woman whose tits are hanging out of a costume-shop puritan ensemble, really should not be naked. This is not to say she is unattractive, in fact for an older lady she's holding up very well, but still I could have done without seeing the goods.

The tits serve as an introduction to the opening chase, in which we watch the topless pilgrim fleeing through the forest with all the haste of a tranquilized turtle. During this sequence we are first introduced to a recurring purple, psychedelic camera perspective than is clearly meant to represent the view of our unseen assailant. The scene concludes when our hapless protestant trips over a rock and comes face to face with our antagonist, a rubber turkey-demon puppet. The foul adversarial fowl spews forth what might be described as a one liner were is humorous, and then dispatches the nippley milk maid with his Native American ceremonial axe.

Still with me? Really? You're still on-board for a movie about a demonic, wise-cracking turkey? Excellent. The fact that you're still here means that you know exactly what to expect from the rest of this film. We jump to the modern day, meet a group of thirty-something teenagers on their way home from college for Thanksgiving Break, and quickly get to the killing. Of the so-called "teenagers," we have  aa strong showing of all the cliched characters that the genre is known for. We have the Jock, the Slut, the Nerd, the Fat Guy, and the the Last Girl are all represented. The only real surprise is we never see the Slut's rack despite a tease early in the film. The acting is uniformly terrible, partially a result of inane dialogue and poor scripting, but if you're actually still watching this movie, you clearly aren't one to care about those sorts of things.

The turkey is a ridiculous rubber hand-puppet that can only be used in extreme close-up, which only serves to reinforce how damn rubbery it is. The one-liners he spews aren't particularly clever, but really did you need anything more ridiculous than a talking, killer turkey? The methods by which the turkey dispatches his victims are mostly varied and imaginative, a strong plus for a film of this type. We're even treated to a sex scene, surprisingly lacing in nudity, in which the Slut unknowingly has sex with the turkey before meeting her untimely fate. My favorite kill of the film is awarded to the Fat Guy, who undergoes a fun food-fantasy sequence that ends similarly to the chest-burster scene in Alien.

In terms of the cinematography on display, I feel that some special mention should go to the psuedo-animated scene explaining the turkey's backstory. The drawings here are fun and fit in with the cartoonish feel of the rest of the film. I'm not sure why this scene is included, whether they didn't have the time and money to costume and film live actors or if it was a aesthetic choice, but either way I felt the sequence worked well within the context of the film. The cartoon drawings make another appropriate appearance later in the film, for the previously mentioned Fat Guy food-fantasy.

As ridiculous as this film is, as bad as the script and acting are, for how little money was clearly spent putting this film together, I nevertheless enjoyed ThanksKilling. I could string together a thousand complaints about the film, but none of them matter. This is an entertaining, low budget B-movie that makes no apologies for what it is. To that same end, I cannot make an exception based on intent. Make no mistake, this is not good cinema. Then again, you're reading a site called B-Movie Geek; you probably care as little about good cinema as I do. You may need a beer or two and group of friends to enjoy it properly, but ThanksKilling could be a great way to spend the evening after Thanksgiving dinner. Just don't think Grandma is going to enjoy it.

The Bottomline: This Thanksgiving the Geek would like to give thanks to the filmmakers for having the balls to put together a script about such a ridiculous antagonist, gathering the actors and funding, and then actually making this film. There is no reason for this movie to exist, but I'm glad it does. This is what low-budget filmmaking is all about.