Sorority Babes in the Slimeball Bowl-O-Rama

Let’s be honest for a moment, shall we? Not all movies are born destined to be award-worthy, mainstream material. There are some films that are made for specific purposes and for specific audiences. Figuratively speaking, some books can be judged by their covers. That said, if you’re the kind of person who reads the title Sorority Babes in the Slimeball Bowl-O-Rama and doesn’t think it would be an experience you would enjoy, then you’re probably right. This film is an unapologetic 80’s  B-movie with super-cheap special effects and enough nudity to ensure that it would only ever be aired during a late, late night time slot on a premium cable station. 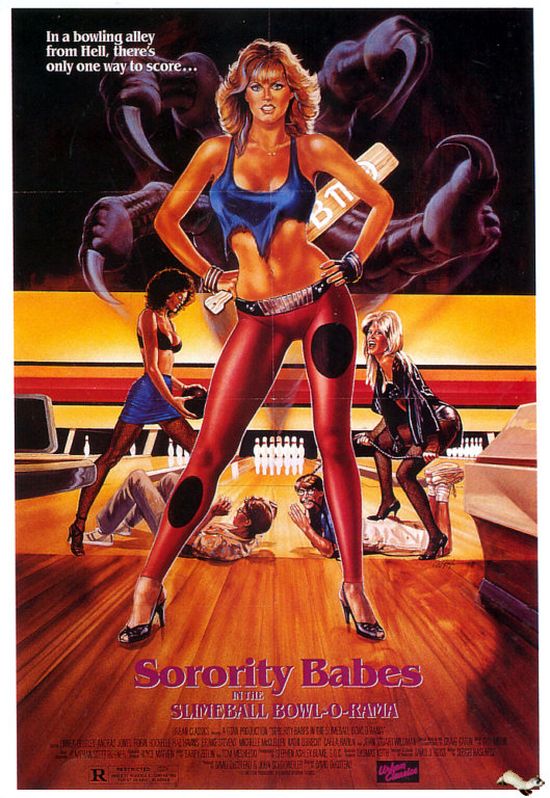 The film begins by introducing us to three college nerds whom have overheard the location of the Tri-Delta sorority initiations. Like any male promised a look at boobies, the three plan to spend their evening spying on the scantily clad would-be sorority sisters. Being bumbling fools, the nerds are caught in the midst of their peeping endeavors and forced to accompany the initiates on their final hazing task: to break into the local bowling alley and to steal a trophy to prove they were there. The group picks up a sixth member once they break into the bowling alley, interrupting a robbery by a blonde punk chick named Spider (Linnea Quigley). Things go from bad to worse for our heroes and hoes when the stolen trophy is broken open, releasing a mean-spirited, wish-granting imp. 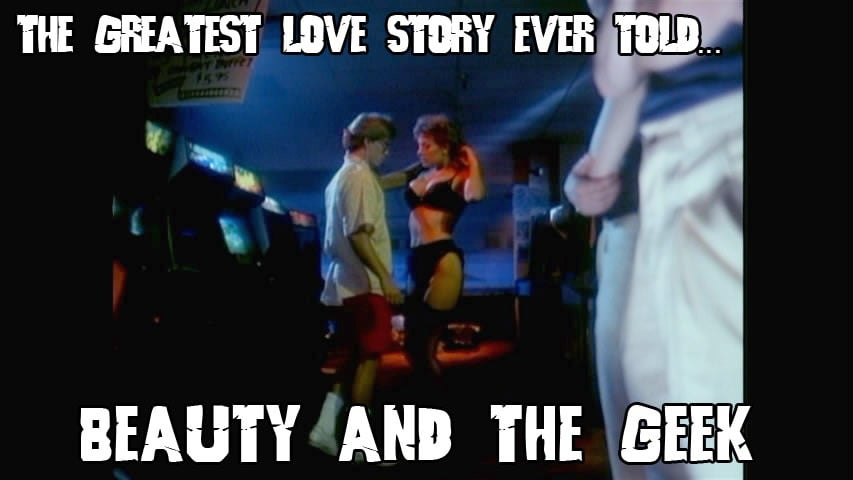 The senior sorority sisters have followed the initiates to the bowling alley, with the intent of scaring the hell out of the newcomers. They witness the initial release and wish-granting by the imp over the security cameras in the bowling alley. The Imp is somehow able to sense their presence, however, and uses his magic to transform them into his mindless minions. As is usually  the case in movies like this, the wishes start off good, as  intended by the respective wish-maker, but quickly degenerate. Once this happens, the main characters are killed off one-by-one by the Imp’s minions. The bulk of the film follows good-hearted nerd Calvin and Spider, both of whom chose not to wish for anything, as they try to escape from the bowling alley with their lives. 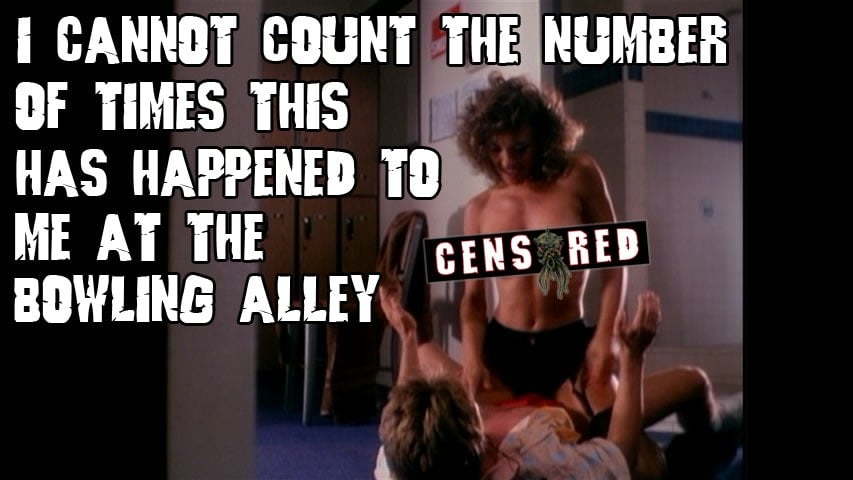 The plot of the film is a fairly imaginative if not quite original creature-flick with ideas far beyond the capability of the special effects on display. The Imp itself is a very rubbery-looking hand puppet of some kind and is always shown either poking around a corner of in extreme closeup. Tight shots like this must have been necessary to keep the puppet operator out of frame but is unfortunate because it reveals the rather poor quality of the puppet itself. I would have definitely  welcomed the use of some rudimentary stop-motion to show some pulled-out shots of the Imp walking around the environments. Regardless, the old time specials effects are still more fun to watch than the cheap CGI that might have been used had the film had been made today. 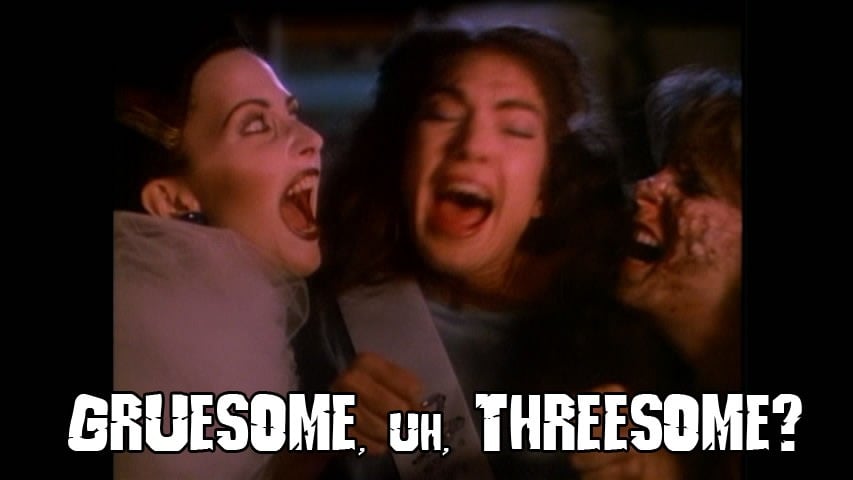 Along the same lines, the make-up effects used for the sorority sisters in their possessed minion states are laughable at best, consisting mainly of a simple costume change to signify their transformation. For some reason, when one of the girls transforms, she become the Bride of Frankenstein although an explanation regarding why this occurs is never provided. Pretty much all of the kills in the film occur at the hands of these human minions, so don’t keep your hopes up for any flashy, magic based death sequences. The kills that do occur are at least somewhat varied and original. One death in particular stands out in my mind and involves a character’s face making friendly with a deep fryer. 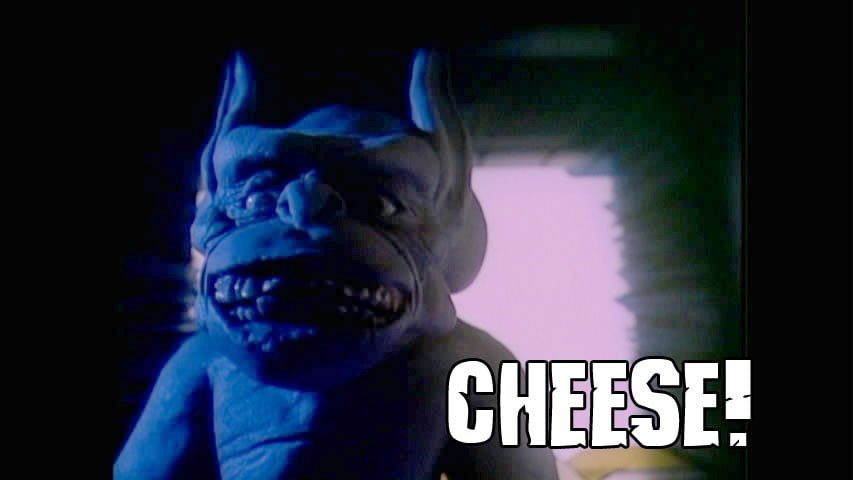 The one thing that this movie has working purely in its favor is its female cast. Sorority Babes has the distinct privilege of being only one of two films to star all three quintessential 1980’s B-movie scream queens; Linnea Quigley, Brinke Stevens and Michelle Bauer. That said, there is an abundance of T&A on display in this film, although the majority of it comes from the later two scream queens exclusively. In fact, Linnea Quigley, shows no skin whatsoever. Although Brinke Stevens has some full frontal in the beginning of the film, Michelle Bauer’s character, Lisa, seems to be in this movie almost exclusively to be naked. Much to the joy of film geeks everywhere, even once the horror elements of the film kick in, Bauer remains committed to showing off the goods. 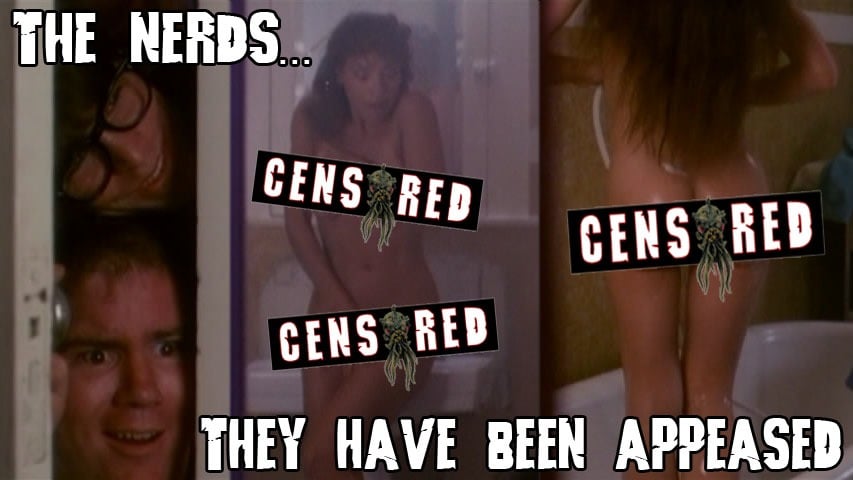 The Bottomline: Sorority Babes in the Slimeball Bowl-O-Rama is good, mindless B-movie fun in its purest form. The effects are cheap, the girls are hot, and the movie just plain feels fun. Yes, there is a lot that could have been done to improve some of the technical aspects of this film, but I like it just the way it is.