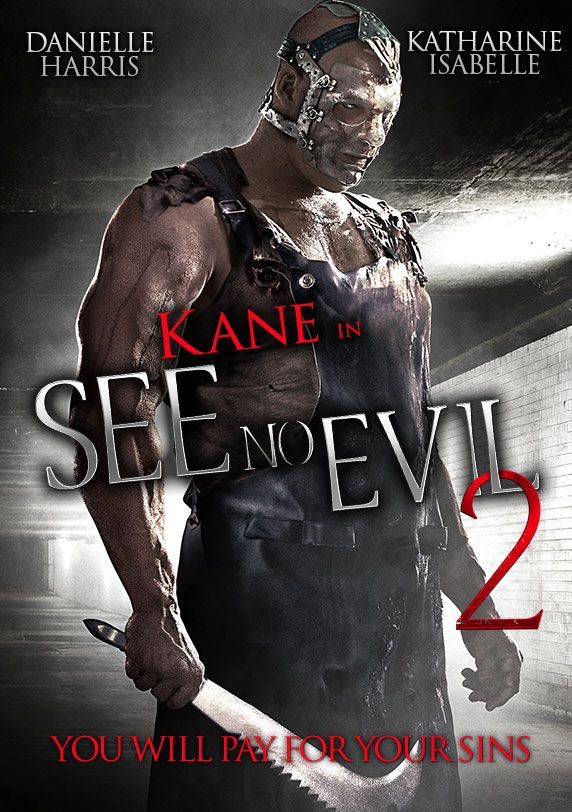 It's October and the B-Movie Geek, Doc Manson, is back to take the #Shocktober challenge! The quest? To watch 31 horror movies in the 31 days of October. Movie #2 is the WWE Studios produced slasher film, See No Evil 2. Full disclosure, this entry into my SHOCKTOBER journey was chosen due to its relevance to my current online activities as co-host of an online talk show about professional wrestling, the NAIborhood podcast.

As mentioned, the film was produced by WWE Studios and stars the Big Red Demon, Kane (Glen Jacobs). I actually thought that the first See No Evil was an OK slasher film, and that Kane's portrayal of Jacob Goodnight -stupid name aside- made for a great slasher antagonist. Kane, after all, is a legitimate 300-lb, 7-foot tall, muscular monster of a man; to say that he is physically imposing is an understatement.

In the sequel, Jacob Goodnight is now missing an eye (the result of the climax of the first film), and wears a clear mask. This provides a more distinctive, iconic look for the killer. Goodnight also makes less use of his chain-hook weapon in the sequel, which in theory ought to help increase variation in the kills. In reality, Goodnight tends to use his bare hands a lot more, and only occasionally makes use of some sort of amputation knife/bone saw combination weapon. Oddly, it also seems that the filmmakers felt as though the violence ratio of the film had to be increased, as nearly all of the kills from the first film appear here in flashback sequences.

I enjoyed the first film, but not everything about it worked, and some of that carries over to See No Evil 2. The whole God's Hand Killer moniker and the underlying religious motivations for the Jacob Goodnight character never quite gel. The religious undertones to the killings just don't seem justified in what is otherwise a standard slasher film. This is material better suited to a headier film.

Beyond that, I continue to think that Glen Jacobs is a fantastic choice to play a horror movie slasher. I say give this guy the hockey mask and give him a go as Jason in the next Friday the 13th (Come on, we all know it's coming sooner or later). I also loved the performances put in by Danielle Harris (Halloween, Hatchet II) and Katharine Isabelle (American Mary, Ginger Snaps).

Credit goes to the screenwriters, Nathan Brookes and Bobby Lee Darby, as they've woven in a couple of great moments into See No Evil 2. The standout is a scene in which one of the legs of a paraplegic man is skewered by a hook on a chain. This moment stuck out to me because, as would be expected, the man doesn't feel any pain in response to the violence against him. There's an odd sort of detachment in his reaction that the directors really translate to the audience through the deft use of visual and audio cues. It's a small moment, but it works well.

The Soska Sisters have directed a finely produced film, coaxed good performance from their actors, and delivered some above average cinematography. Seriously, the use of colors and clarity in certain shots of this film are way above the level of a direct to DVD film. In light of the many things done so well in this film, it's all the more disappointing then that the end sequence is so poorly executed.

In the film's final moments, Jacob Goodnight is stabbed by a large surgical needle and pumped full of embalming fluid. The embalming fluid sequence is just poorly shot; too much time elapses between the stabbing and the activation of the fluid pump mechanism. The scene lacks any sort of proper cadence, marring the tension in what is otherwise a fulfilling and creative end to the antagonist.

That said, I'll watch another one. I guess you could say, I'd be glad to See More Evil.

OK, that was funnier in my head.