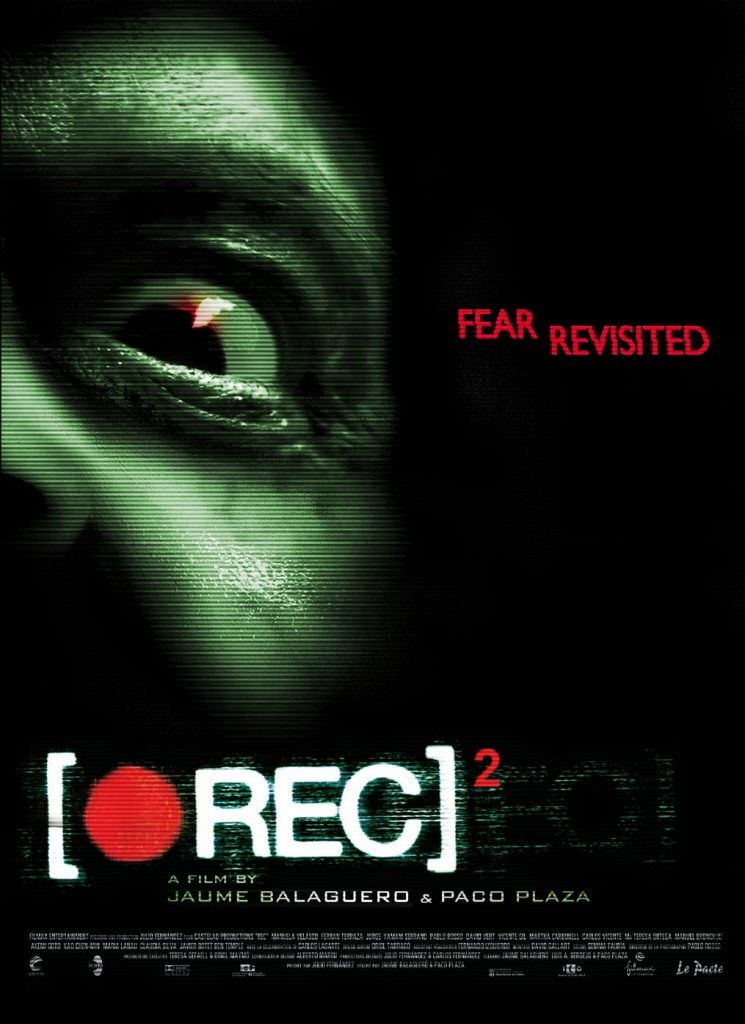 Doc Manson returns to his roots for the month of October, taking the Horror Movie Challenge. The quest before him? To watch 31 horror movies in 31 days. And to be extra ambitious, try to write something about each one on this website. So far, so good. We're through movie #4, which is the foreign import [REC] 2.

The film is a sequel to the Spanish film [REC], a well-made zombie-infection type movie with a twist. I previously reviewed the first film, and you can refresh yourself on the series by clicking here. Go ahead, I'll wait for you to come back.

Alright, so let's be clear: here, there by spoilers! If you don't want the end of [REC] spoiled for you, you will need to stop reading here. The wrinkle introduced into the zombie infection formula at the end of that film plays prominently into the plot of the sequel which necessitates talking about that development at length.

Alright, so, the zombies aren't just zombies. Turns out that the infested apartment building is the site of ongoing scientific experimentation run by a doctor associated with the Vatican. His research project? Finding the molecular basis for demonic possession. Unfortunately, the doctor did his job a little too well, isolating an enzyme found in the blood and saliva that is able to transmit like a virus. The infected folks aren't just zombies, they're possessed by one demon whose consciousness co-habitates all of the infected folk simultaneously.

Demon zombie hive-mind, then? Got it? Good.

The sequel picks up right where the first one leaves off -literally, with the same shot. The action picks up with a new group of characters, a SWAT team escorting a Ministry of Health official into the apartment building. The film is still filmed in the found-footage or shaky-cam style, although the SWAT team has some interesting picture in picture capable equipment that provides unique view points that I hadn't previously seen in films of this types. Definitely bonus points for innovative cinematography.

The film also splits its runtime between a second group of characters. Scenes play out from multiple angles and perspectives, and time has a way of skipping back and forth. It's rather satisfying to realize that you're watching a scene play out from a parallel perspective, and to piece together the continuity on your own. The script is smart and it keeps the film engaging.

Much like the first [REC], the sequel is a great film. The only issue is, once again, they introduce new information during the closing minutes of the film. As a viewer that likes to try to piece together stories, I'm conflicted by the continued use of this device by the [REC] series. Like an Agatha Christie novel that deliberately denies you information, I felt somewhat cheated as the credits began to roll. Don't get me wrong, I like being surprised, but I hate it when the rules are suddenly changed. I'm mostly just hoping that the same formula isn't applied to the third film in the series.

I hope to find out for sure later this month -both [REC] 3 and [REC] 4 are currently on Netflix Instant Streaming!

Minor complaints aside, this film was good. GOOD.