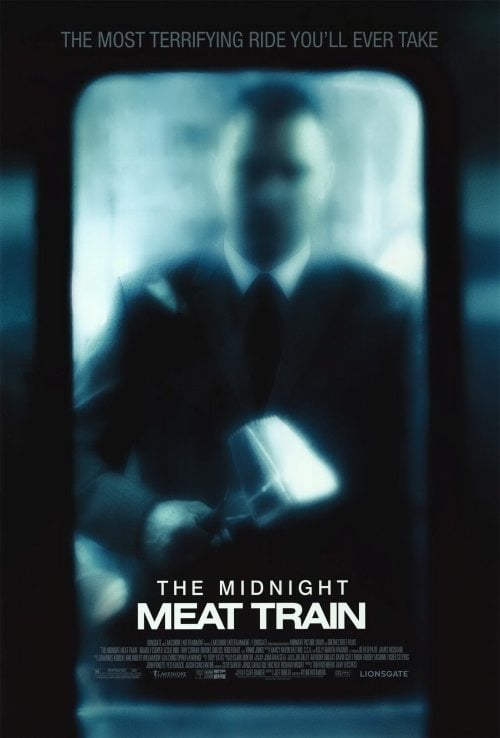 Sometime back in 2007 when I first heard that one of the most visually striking Japanese directors was coming to Hollywood, I became immediately giddy with excitement. Back in my college days, Ryuhei Kitamura may have single handily inspired my love for foreign films, responsible for such inspired genre fare as Versus, Alive, and Aragami. My excitement for the potential project was only magnified when I learned that Kitamura would be working with horror master Clive Barker in an adaptation of Barker's own short story, The Midnight Meat Train.

I followed the project for some time but began to wonder about the direction the project was taking around the time I saw the first trailers for the film. The initial footage made the film look plodding and dull, an impression that delayed my viewing of the final product for some many months after its eventual DVD release. Along the course of its development, the film also seemed to lose the confidence of its production company This was evidenced by Lionsgate Films' decision to only release the film to second-run, discount theaters. In all fairness to the movie, this decision was based less on the quality of the final product than on a change in company management that was seeking to bury some projects green-lit by the previous administration. This was definitely a bum deal for Kitamura's state-side debut and did nothing to alleviate my potential concerns over the quality of the final film.

Having now sat through the full 100 minutes making up The Midnight Meat Train's runtime, I can now say that my initial impressions of the film were basically spot on. The film attempts to maintain a more realistic tone through most of its scenes. The story  follows struggling, middle-aged photographer, Leon, as he roams around New York City attempting to capture images capturing the figurative spirit of the city. In the course of this late night adventures, Leon rescues a young woman from a gang of thugs, only to read about her death in the next day's paper. This event is the driving force that propels him to uncover a deep and far reaching conspiracy centered around a mysterious subway serial killer.

Technically speaking the film is pieced together well. The cinematography is nice and the city has a gritty, true to life feel about it. None of the writing or dialogue is noticeably bad, but none of it really stands out either. All of the actors are competent and I was surprised to see Brooke Shields appear in a brief supporting role. As far as the acting is concerned, everyone provides passable performances. I feel that Vinnie Jones deserves some special mention given that his character, the antagonist Mahogany, has only one line of dialogue in the film. Jones does a lot with the role given that it is an almost purely physical portrayal.

The Midnight Meat Train's greatest flaw is the disconnect that exists between the scenes forwarding the plot and the scenes showcasing the film's gruesome death sequences. For a movie whose plot and characters seem to be aiming for a somewhat realistic style, the overdone and ridiculously bloody murders simply do not fit. Geysers of CGI blood spouting from eye-bursting hammer blows to the head stand in stark contrast to the tone set by the rest of the film. Admittedly, these highly stylized scenes of violence showcase the very flair and visual adeptness that had me excited to see Kitamura attached to this project in the first place. However, the unexpected shift in tone was so great that the first few gore effects left me doubled over in laughter. Although entertained, I do not feel that my reaction was the same as that which the film intended to illicit from its audience.

A similar complaint could be leveled at the ending of the film, in which a supernatural component is suddenly thrust into the story. Although earlier in the film there are hints that not everything is as it seems, the true nature of the situation is not completely revealed until the final moments of the film. Because of the late reveal of these otherworldly elements, the final plot twist comes of feeling forced. Up until this point the film has done a good job presenting the audience with an interesting murder-mystery with  its basis in the real world. As the movie has done a reasonably good job telling its story up to this point, the audience is interested in seeing the resolution of the conflict as presented. The twist not only robs the audience of the satisfaction of seeing the events played out to completion but also serves to undermine the illusion of reality that the film has carefully built over time.

I think my problem with the ending of this film is directly tied to the medium in which it is being presented. The Midnight Meat Train was originally presented as a short story by Clive Barker in his collection, The Books of Blood. I do not think I would have taken issue with the supernatural twist at the end of the tale if I had been experiencing it off of the written page. Reading fifty or seventy five pages of a short story seems like less of a time investment than watching a 100 minute movie, and, being a short story in a horror anthology, there are certain expectations associated with how the story will play out.

The Bottomline: The Midnight Meat Train is a solid experience with interesting visuals, a surprising story, and a healthy serving of ridiculous deaths. There are better movies that you could watch, but if you found the trailer intriguing, there are worse ways to spend an evening.