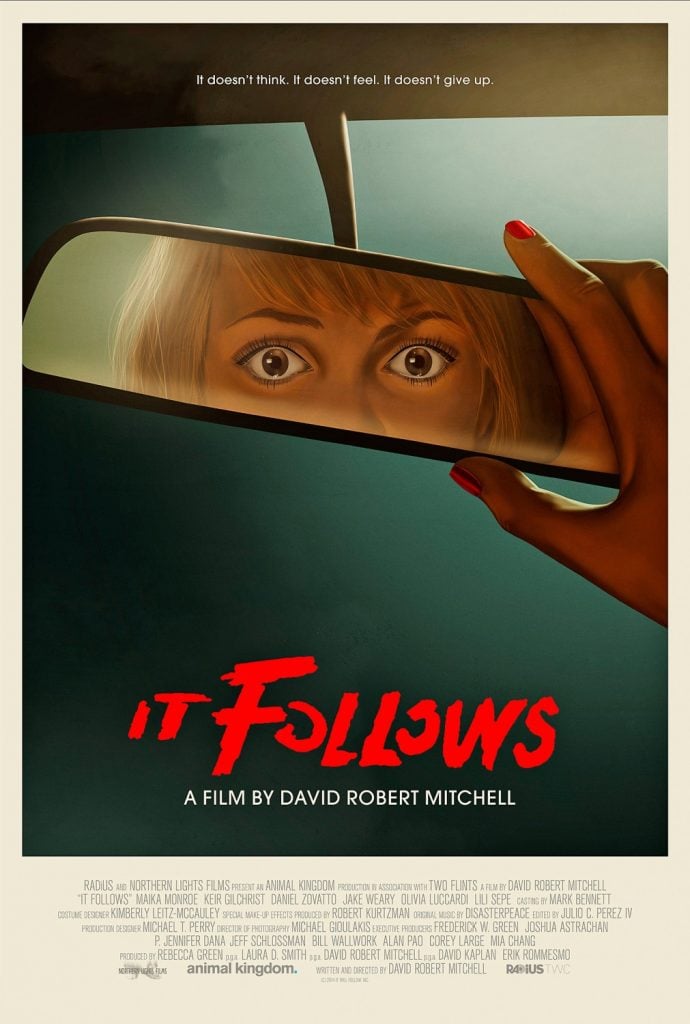 It's October and the B-Movie Geek, Doc Manson, is back to take the #Shocktober challenge! The quest? To watch 31 horror movies in the 31 days of October. Tonight I'm here to report back on movie #8, an intensely unsettling independent film titled It Follows.

It Follows is one of the best pure horror films that I've seen in some time, and I hesitate to really give anything about it away. The film has a great, relevant premise and introduces its concepts so well that to explain anything here would only serve to ruin the tempo and pacing of the film, which is extremely well crafted.

Ok, so here is the deal. If you like horror movies, you should go watch It Follows right now. Don't read about it; don't ask your friend about it; just get a copy and watch it. Right now. After you've seen it, feel free to come back to this site and read the remainder of this article.

I realize that this sounds like hyperbole, and I admit that the praise is high. Sure, I expect that there are a contingent of horror fans who probably won't like this film for any number of reasons: not enough gore; not enough nudity; the action is too slow; etc. Still, and I know this is subjective, but It Follows is one of the best pure horror films to be released in recent memory. The film has an innovative idea that is genuinely disturbing, made all the more potent by the parable-like lessons one might take from its story.

Broadly, It Follows is about a monster than literally follows you everywhere you go. It will relentlessly come after you, and it will always do so at a walking pace. You can get away from it if you run; you can even drive away to get yourself some distance between you and It. But, It will never stop coming for you. This alone is an interesting premise that plays off of a long-established trope of the genre. For years people have commented that it shouldn't be hard to get away from Michael Myers or Jason Voorhees; neither of these slashers ever move faster than a brisk walk. The creature from It Follows is less physical, and somehow more relentless. No matter where you go, no matter where you hide, It knows where you are and It is coming for you.

This alone would be enough for an interesting premise to a film, but It Follows also adds on a layer of a morality tale. The way in which you become targeted by this creature is by having sex with the person it is currently targeting. The only way to stop being pursued by the creature and survive is to pass It on to someone else. A clever parable in and of itself, but there's even more to it. If you do pass It on to another person, and that person dies, It then reverts down the line and will begin stalking you once again. This means that not only do you need to pass It on, but you need to convince the next person to continue passing It along. And even then, even if you know that it has been passed along once or twice or even three times, there is no guarantee that It wont eventually, someday, find Its way back to you again. Once you catch It, you are never truly safe again.

I also just briefly want to compliment the cinematography on display in the film. I think the majority of the film is shot using wide-angle lenses, and this is a perfect device to compliment the nature of the antagonist. There are a number of shots in the film where you see, in the far distance, someone just walking within the frame of the camera. Is it just another human being? Or has It found our protagonists once again? This is a great, effective method of building tension and suspense within the context of the threat.

So what is the real meaning behind the story of It Follows? Is it a commentary on premarital sex? The inevitability of death? The way in which love and the physical act of sex helps to delay your sense of your own mortality? Is it about the stigma associated with being a young person engaging in sex and developing a reputation amongst their peers? The answer is yes. It Follows is all of those things and none of those things. It also happens to be a damn good horror movie.

Five stars. So good, I didn't even make any silly pictures.