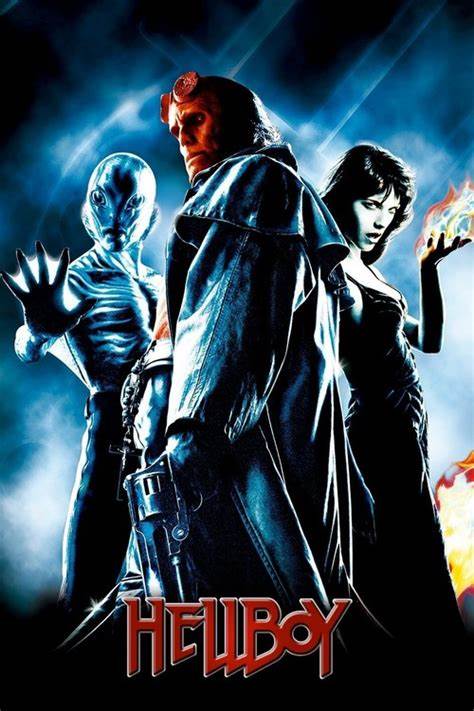 The modern comic movie adaptation fan has clearly been spoiled by the excellent Iron Man from Marvel Studios and the Batman Begins franchise reboot from Warner. Back in 2004 when Hellboy hit the silver screen the best efforts we had seen so far were Spider-Man two years previous, X2: X-Men United, and Spider-Man 2 that very same summer. While there was precedent for good comic adaptions, Hellboy was by no means a sure fire hit.

You'll be glad Revolutionary Studios took a chance on this property. At first glace, a big, bright red demon smoking cigars and cracking wise doesn't look like a recipe for success. There was a real chance that, in the wrong hands, the artistic visual style of the comic books could seriously hamper any serious attempts to adapt the character for a mainstream audience. The studio was right to take on the still budding director Guillmero del Toro to work on the film. As a filmmaker, del Toro has never shied away from the fantastic. Years after Hellboy, he would come into his own with the visually impressive and thought provoking Pan's Labyrinth. At this time, del Toro still had something to prove.

By taking one look at Hellboy, you can really feel del Toro's visual style just beginning to take shape and pop off of the celluloid. His eagerness to embrace special effects, both practical and computer generated, does the realization of Mike Mignolia's Hellboy universe a great justice. Although del Toro is clearly just gaining his footing in this film, and he definitely feels reigned in by studio suits at some points, you never doubt his energy and enthusiasm for the material.

Enough pre-review swooning. Onto the film. Hellboy is a fun-filled, action-oriented experience. The special effects are all well done and the practical makeup effects used to bring the life the titular character are top notch. As good as the makeup is, Hellboy would be nothing without the actor beneath the latex, and Ron Perlman delivers in spades. His ability to act from beneath a full facial appliance is a true testament to this unsung Hollywood hero's abilities. Hellboy himself is a fun character, with a lot of personality. His bright red skin jumps off the screen, but his cigar chomping, wise cracking, bullish attitude is what makes him memorable.

Doug Jones does a wonderful job as the the man inside the Abe Sapien makeup, delivering a performance just this side of Andy Serkis. His voice acting by David Hyde Pierce is top notch. The necessary babe and love interest, provided by Selma Blair as the firestarter Liz Sherman, is suitable hot both literally and figurtively. John Hurt plays Hellboy's adopted father and doesn't miss a single sentimental beat. As far as acting goes, there isn't much here to complain about.

The script, on the other hand, is a bit lacking. The Lovecraftian themes are definitely welcome. More stories involving the elder gods and the chaotic hells they may bring upon the earth are needed in films. It's a story line not yet mined for all it's worth, so some credit for being original is definitely due. However, some of the scripting and dialogue is just clunky and overly expositional. Too much of Hellboy's world is explained to us rather than letting us experience it. The biggest sin the movie makes is the inclusion of the main human or "normal" character, John Myers. Rupert Evans does a commendable job with the material he's given, but it just isn't enough to stop the character from feeling like a studio note. It's almost imaginable that some studio suit somewhere couldn't justify letting del Toro make a movie about a bunch of freaks. The charatcer of John Myers is there to provide the audience with a "normal" character they can identify with, and so that the audience can be introduced to the world with a suitable anchor to reality. Basically, it feels like a big cop-out.

Luckily, despite some clunkiness, the movie is driven by a collection of imaginative, particularly nasty villains. The lead amongst them is Rasputin, as realized by Karel Roden. He and his mistress are suitable masterminds for the proceedings, but it's their company that's far more interesting. The walking, mechanical nightmare that is Karl Ruprecht Kroenen is a sight to behold, particularly with his Vader-like breathing aparatus removed. A cooler henchman hasn't been seen in cinema in many years. Sammael, the hound of resurrection, is a fun creature-creation, although the costume does look a bit rubbery in some scenes.

The plot of the film deals with Rasputin trying to bring about the end of the world by allowing the elder gods entry into our world. Hellboy himself is central to this plot, being the demon son of the ultimate evil. Having been raised by men to know the trials and tribulations of our world, he will be left with a choice. Will Hellboy fulfill his destiny and bring about the end times or will he rise above and fight for the salvation of mankind?

The Bottomline: Hellboy is a good comic movie, made in a time when good comic book movies were still a rarity. If you're willing to accept some cheese and a few pieces of clunky exposition, you are unlikely to be disappointed.