The Haunted World of El Superbeasto 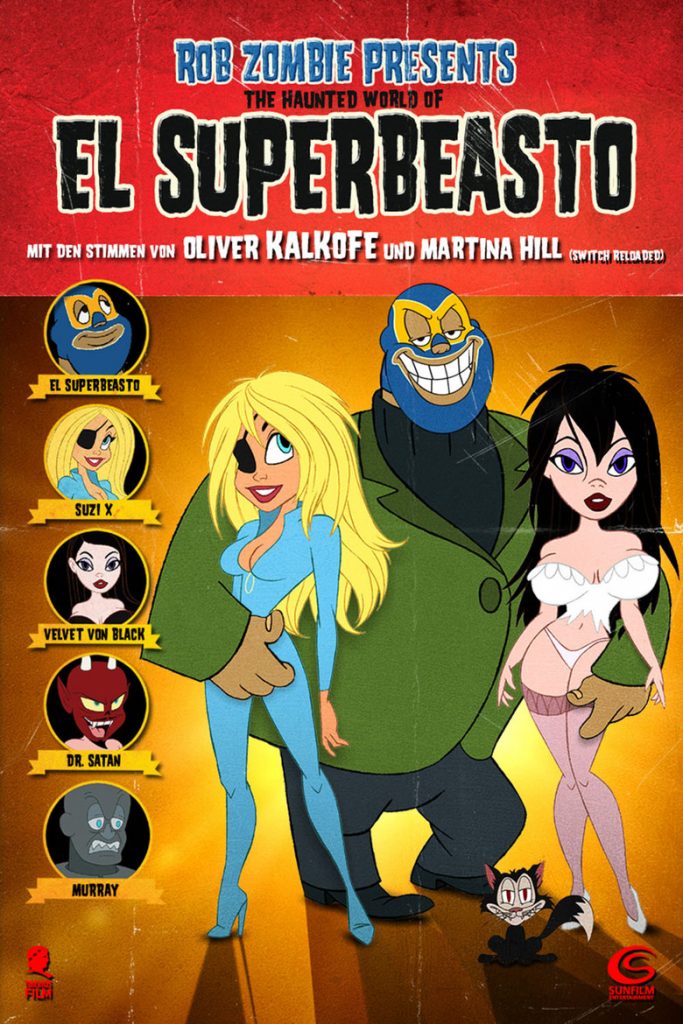 Rob Zombie has spent considerable effort over the last decade trying to break into and legitimize himself in the horror filmmaking world. There can be no doubt that Zombie has shown himself to be very passionate about the genre and genuinely is trying to please the would-be fans of his films. Unfortunately for him, it seems that fans have largely been divided by Zombie's works instead of standing unified behind him.

Part of this divide is no doubt due to the choice of his projects. House of 1,000 Corpses was an extremely rough, amateur outing and its follow-up, The Devil's Rejects, was action-heavy and pushing the boundaries of what I'd considered a genre piece. The Halloween remake was sure to be a polarizing experiences for horror fans regardless as to whose hands the project was placed, and the sequel certainly wasn't going to do anything to change anyone's minds on the matter.

Given this history, I appreciated seeing a project from Rob Zombie that seemed to step so far away from his previous releases. The animated film The Haunted World of El Superbeasto is a definite departure from his other forays into filmmaking. Part of this is no doubt due to the fact that although the story and directing nods go to Zombie, a lot of artist and animators were involved in crafting and influencing the final product. The project still wears Zombie's horror roots squarely upon its sleeves, featuring demons, nazi zombies, werewolves, and vampires at various points in the story. However, El Superbeasto is not a work of horror, nor is it really a horror comedy. This film is a sex comedy that is merely sporting the visual trappings of the horror genre as a way of defining its personality.

Although I felt much of the film was fairly incomprehensible, the plot itself is straightforward. Briefly, the evil Dr. Satan (a fun turn by Paul Giamatti) sends his lackey ape to kidnap the perpetually-naked, foul-mouthed stripper, Velvet Von Black (a ridiculously entertaining turn by Rosario Dawson).  As the legend goes, once Dr. Satan must convince her to marry him so that he will be infused with the unstoppable powers of Old Scratchfoot himself. Conveniently, our hero Superbeasto happens to be in the strip club where Velvet is performing and has set his mind on banging the hell out of her. His desire to tap that ass provides his motivation in chasing after Velvet once she is kidnapped and serves as the central fuel for the forward momentum of the story. Really. Superbeasto is helped out on his quest by the ridiculously over-sexed character of Suzi-X, his crimefighting step-sister, and her perpetually horny man-bot sidekick. Hilarity ensues.

At this point in the review I feel the need to come clean. I don't know whether or not I liked this movie. Don't get me wrong, its sick and vulgar, humorous at times, and is definitely entertaining. But the story is so free-flowing and the events so random that the entire film feels somewhat disjointed and without purpose. For instance, the character of Suzi-X is introduced as she raids a zombie-nazi castle to steal/destroy the decapitated head of Zombie Hitler. Funny perhaps, and with winking towards Zombie's faux-trailer for Werewolf Women of the SS from the interludes in Grindhouse, but really completely unrelated to the rest of the film. In fact, the whole sequence comes off feeling like padding and, when your movie is only 77 minutes long, this suggests some fundamental problems with the scripting.

That said, the movie is entertaining. The runtime is short enough that although the overtly sexual gags and constant nudity stop feeling imaginative or edgy fairly quickly, they don't ever become grating. The animation helps with this because the novelty of watching cartoon characters perform these violent and sexual acts somehow remains strong throughout. This novelty is only helped by the quality of the animation, which is actually quite high. This should be expected considering the talent that worked on bringing The Haunted World of El Superbeasto to life are mostly industry veterans, whose collective credits include Pixar films, Disney movies, The Simpsons, and most of Cartoon Network's current lineup. You can tell that these artists had a ball drawing and animating the various depraved scenes on display here.

The Haunted World of El Superbeasto contains numerous nods and references to Zombie's previous works, film and music both. For instance, the iconic character of Captain Spaulding, played by genre favorite Sid Haig in Zombie's directorial debut House of 1,000 Corpses, makes an appearance here in animated form. Other regulars like Bill Moseley, Danny Trejo and Sheri Moon Zombie lend their likenesses and voices to the various characters in the film. In another nod to Zombie's previous works, the titular Superbeasto, a mask-wearing, egotistical, luchador superhero, shares his name with a successful single from early in Zombie's solo music career.

In the end, I'm conflicted about this film and must confess that the contradictions present in this review are a direct manifestation of those feelings. I think I liked The Haunted World of El Superbeasto, but I don't know if I'd favorably recommend it to anyone. At the same time, even if its shtick feels worn out by then end, the film is well made and does succeed at being genuinely entertaining. Given that, it seems as though a recommendation ought to follow in short order. Like I said, I'm conflicted. In the end, I don't suppose many people have ever seen a film quite like this one (except maybe those of you "lucky" enough to have caught Fritz the Cat). For the sheer novelty alone, I suppose this one is worth a watch. Part of me suspects that this is a film that I will look upon more favorably as more time passes from my initial viewing. Even as I write these words I'm beginning to feel the compulsion to watch it again. Perhaps a second viewing down the line will help clear up these mixed feelings.

The Bottomline: This film exists. I watched it. Maybe you should too? Be prepared for lots of cartoon violence and graphic nudity, although nothing dips into X-rated territory. Zombie fans should get a kick out of the numerous references to his other works.