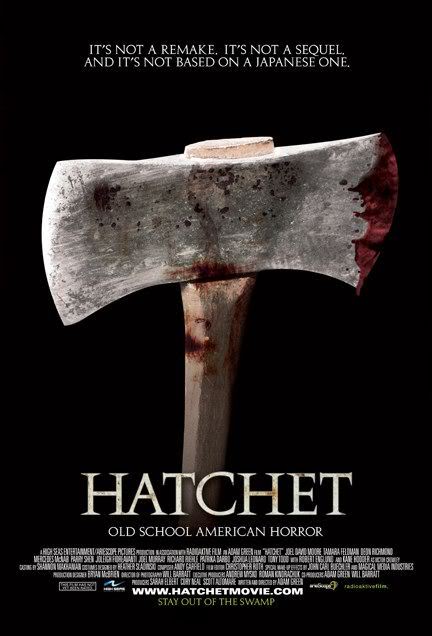 For too long the Hollywood machine has churned out crappy horror movie after crappy horror movie, with sequels and remakes being the theme of the day. The last few years have seen more PG-13, pointless, blood and nudity-free, soft horror films than ever before. The Texas Chainsaw Massacre remake and subsequent sequel were terrible. The remake of The Fog was a bore. Hostel and Hostel 2, while R-rated, were plot-less, derivative drivel lacking any remotely likable characters. The Eye, The Grudge, The Ring: all Americanized, spiritless, lesser versions of the original imports.

In my previous preview leading up the release of Hatchet, I wrongfully assumed that this movie was going to amount to a quick and dirty ripoff of Friday the 13th.  A good deal of the buzz surrounding this film has revolved around the fact that the titular weapon-wielding maniac would be played by longtime fan-favorite Kane Hodder. For those not in the know, Kane played Jason Voorhees in Friday the 13th VII and onwards and is considered by many to be the ultimate incarnation of that character. While the lead up to Hatchet played upon this connection and did its best to make its villain look and sound like Jason, Victor Crowley is an entirely different blood-crazed freak.

The plot of Hatchet see a group of three male, college friends seeking to take a temporary break from the constant barrage of booze and boobs of Mardi Gras to take a haunted swamp tour. Additional members of the tour group include the Asian American tour guide, an older husband and wife tourist couple, a seedy softcore porn director and his two "actresses," and finally the girl with a mysterious past. The tour takes a turn for the worse when the boat runs aground and they get stranded out in the middle of the bayou. Things go from bad to even worse when the groups happens upon the ghostly yet physical manifestation of Victor Crowley's childhood home.

The biggest complaint I have with the film is that the real star, Victor Crowley, is essentially a complete non-entity until the final thirty minutes. It's "The Jaws Effect" where the director tries to build suspense with the audience by keeping the monster off screen until the big, dramatic reveal. Unfortunately, I don't feel that this approach works for Hatchet. As the movie progresses through its first two acts the audience receives only a small handful of half glimpses of Victor but fails to build suspense leading up to the reveal. I acknowledge what the director, Adam Green, was trying to do but when the moment of revelation does finally come, it feels like too little too late.

Luckily for the film, from the moment of Victor's arrival to the rolling of the end credits, Hatchet becomes a horror-themed roller coaster ride of epic proportions. Victor Crowley is simply the coolest slasher personification to emerge in the last decade of genre films. The makeup effects that transform Kane Hodder into Victor Crowley are top-notch work that even Tom Savini would be proud of. Hodder does a fantastic job in his portrayal of the monster, producing a horror icon that behaves like none that have come before. Where Jason was slow and deliberate, Victor is quick and spontaneous. He's constantly moving and thrashing his arms, resembling a rapid animal more than a man. The Crowley character is Kane Hodder's raged-out Jason, taken to the next level. Really, it's quite glorious.

Hatchet is one hell of a violent movie. The blood runs free and there's plenty of mean-spirited, nasty deaths. The nice thing about the film is that the violence knows it's over the top. While there's no overtly deliberate audience winking, the movie knows it's supposed to be delivering a good time and never takes itself too seriously. In addition, I challenge anyone to find a kill in any of the Friday movies that can hold a candle to the death of Mrs. Permatteo. The creativity on display from the filmmakers is nothing short of remarkable. Adam Green's finger is directly over the pulse of what old school horror hounds crave.

I mentioned earlier that the movie takes too long setting itself up. While this is true, there is good news to be had. While those early 45 minutes spend too much time focusing on character development, these scenes still manage to be righteously entertaining. The movie has a defined sense of humor and the actors perfectly suited to making sure that the jokes are legitimately funny. The frequent bursts of humor help the action stay lively despite the lack of bloodshed. It also bears to be mentioned that genre veterans Tony Todd and Robert Englund also make cameo appearances. Englund in particular is a geek's dream. This may be the closest that we ever get to seeing the real Freddy and the real Jason duke it out, even if Englund's death does occur off-screen.

Now for my biggest complaint, which isn't about the movie itself: This movie is a blood-soaked, over-the-top thrill ride that DEMANDS to be viewed in a sold out movie theater. The fact that this film did not receive a wide-theatrical release is a downright travesty. Hatchet needs to be seen with a rowdy crowd, one where everyone knows the right time to scream, to yell, and to throw popcorn at the screen. Shame on you for denying me that experience, Hollywood

The Bottomline: If you're a horror fan, check this movie out. preferably with a large group of friends. Pop corn is a must. Writer/Director Adam Green will go places in this genre if he wants to, and I hope he will. I'd love to see a Hatchet 2, especially in the theaters.