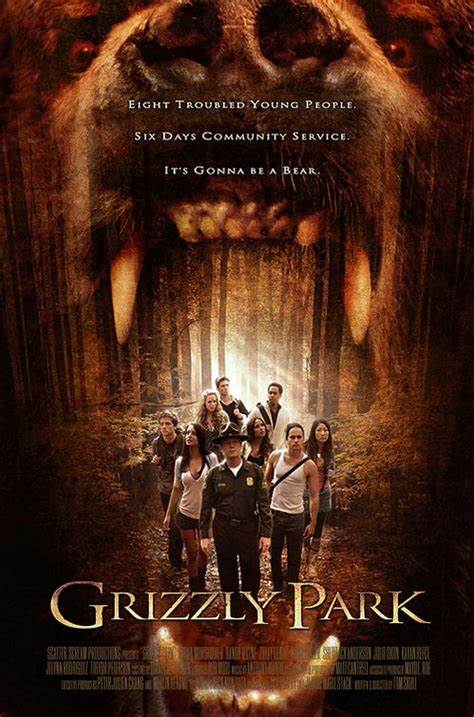 On this latest stroll through the woods, a group of young delinquents are sent into the titular national park to repay their debt to society. As teased early in the film, each of the characters in Grizzly Park are the perpetrators of some misdemeanor crime for which they are performing community service. The film was released in 2008 and clearly had some budget behind it, as the presentation is unarguably slick for a movie that never saw a wide release prior to the DVD market.

The plot is a mishmash of different ideas, none of which seem to be particularly well developed or concluded by the time the end credits roll. The film begins with a correctional facilities officer on the side of the road, replacing a blown out tire on his van. A serial killer, Butch, whom has just escaped from a local prison, comes across the officer and promptly does him in, stealing the officer's uniform and the van. Then, instead of taking the van and making for Canada, Butch inexplicably decides to stick to the dead officer's appointments and makes his way down to the local county police station to pick up his young charges.

Butch follows along with the plan for awhile, taking the group of felons up to the ranger station at Grizzly Park where they meet the local forest rangers, Bob and Michael. Ranger Bob (Glenn Morshower) has the singular and unenviable  pleasure of leading the group into the woods for the weekend and that Ranger Mike is going to stay back at the Ranger Station should the group need to radio back for anything. This is a good plan until Ranger Bob and the criminals leave and Butch messily dispatches poor, handsome Ranger Mike. Butch himself then takes to the woods, with the intention of intercepting and dispatching the rest of the characters at the cabin at the top of the mountain.

The plan seems to be going swimmingly for our good slasher friend until a giant grizzly bear catches the scent of his blood stained uniform. With only his switch blade to defend himself with, things don't turn out well for old Butch. This scene takes place at the 40 minute mark in the film and is representative of the film's foremost problem; it seems that even through the scripting stage the writers didn't know what they wanted this movie to be. The previous 40 minutes of the film have been your normal, run of the mill slasher film with a decidedly human adversary and now the role of the film's antagonist is suddenly transferred to this grizzly bear, a force of nature. It's almost like two halves of two different films were taken and stitched together with a common cast of victims. The two halves never seem unified and are certainly not helped by an ambiguous ending scene seemingly tacked on during the final moments.

The problems with the script are not relegated to the dichotomy of the plot. The various characters making up the group of youthful law offenders are almost all unlikable and, over the course of the film, most are all revealed to be guilty of crimes that reach rather far beyond their surface misdemeanors. None of the characters seem to appreciate the beauty of the national park and, despite Ranger Bob's best attempts, none seem to be using their community service time to reflect back on their own misdeeds. Neither the prostitute willing to do it all for Coach bags and Gucci shoes, nor the rich frat guy into auto-erotic asphyxiation and 15 year old girls seem to have any intention of using this time to properly repent their sins. None of these young characters are likable, with the sole exception of the sweet but ditzy brunette, Bebe (Emily Foxler).

For a film filled almost entirely with fodder, it takes entirely too much of the film's 91 minute runtime for the first of these characters to meet their maker. Not counting Butch's victims, the first death disappointingly clocks in somewhere around the 57-minute mark and takes place mostly off-camera. Also indicative of further scripting problems, much of the dialogue is inane back and forth between two-dimensional characters whom seem to only be interested in their assigned vices. It says a lot when your most complex character is a gasoline-huffing white supremacist who experiences conflicted emotions about his boner for the Latina gang-banger.

Despite all of these remarks, there are parts of Grizzly Park to recommend. First time writer/director Tom Skull has shown quite a bit of skill for his first project, particularly in regards to the presentation and cinematography. Once the final act begins and the blood begins to flow, the remaining twenty minutes of the film contain a good deal of manic, B-movie fun. A few of the deaths in this last sequence are hilariously over-the-top, including one kill that sees a breast implant ripped out and popped against a tree like a water balloon. Some of the cheap special effects also help maintain that fun B-movie feel, like the clearly fake prop bear arms that aroused a chuckle from me on several occasions. Speaking of which, an actual Kodiak grizzly bear, Brody, was used to film the live-action bear scenes peppered throughout the film. Brody gives a good performance but, based on the editing, it seems he was never actually on set with any of the actors during filming.

The Bottomline: Grizzly Park is an average B-movie that takes entirely too long to get to the pay off. The first half suffers from an identity crisis, not clearly defining itself as a slasher or man-against-nature flick. Shallow characters and a poorly executed ending also mar the experience. Still, if you're in the mood for some hot man-on-bear action, you might do worse than this.