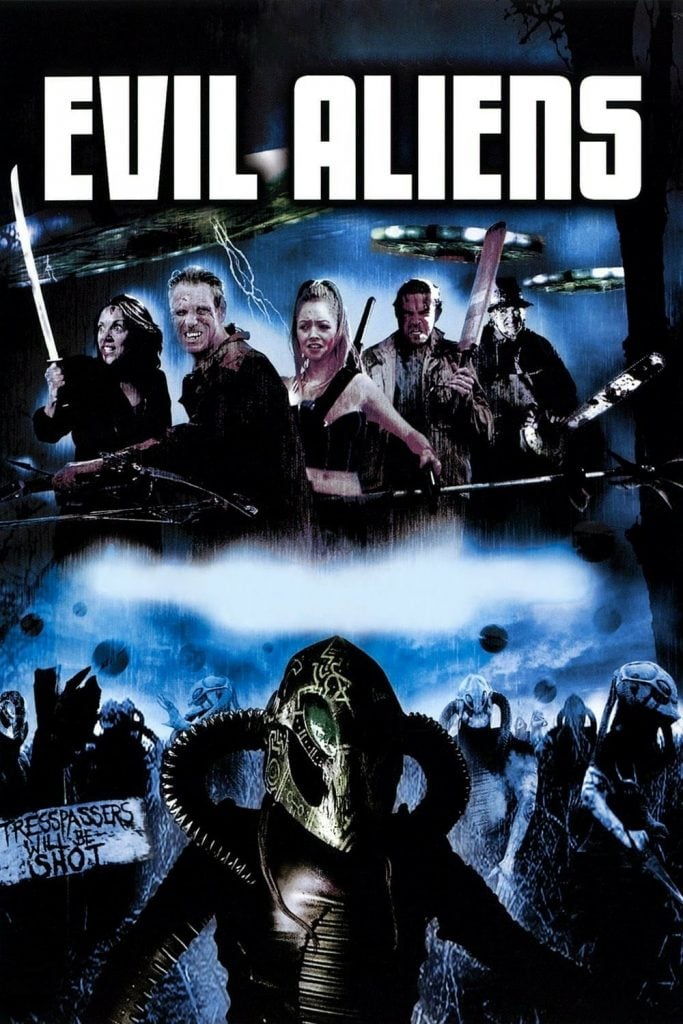 Let's be up front about this. Some of you aren't going to like this movie. More to the point, there's a good number of you that won't understand this movie. At all. Not one iota. Evil Aliens was shot on video, has questionable acting, and, at times, is just plain over the top ridiculous. To enjoy this movie you will need to be one of three things:

That said, let's get to the flick.

I don't think I can appropriately convey the awesomeness of this movie with words, so I won't even try. I'll let the film speak for itself.

Yeah, that's right. A female alien strips down and engages in rough, freaky, intergalactic, interspecies sex with one of the male leads. Folks, I've seen a lot of movies, but this one was new to me. Oh yeah, you know how in bad horror movies blood just seems to spray everywhere? This scene caps off like that, but the fluid in question definitely isn't blood.

If you're a fan of Peter Jackson's early work, you're well aware of a little movie called Dead Alive (or Brain Dead, if you're from the UK). At the climax of that film, the main character fights off a horde of zombies with an upturned, gas-engine lawnmower. Do you remember the giddy excitement you felt the first time you saw that scene? That one moment where he was about to hit that first zombie with that lawnmower and you thought to yourself, "There's no way they're actually going to- OH GOD! They're actually showing it!" Yeah. The wheat thresher scene is kind of like that.

Finally, we have the obligatory, hand-held, motorized power tool. Ash has his chainsaw. Lionel has his lawnmower. Candy has her hand-held soil tiller. Copious homage to other genre films is paid during the setup and execution of this scene. A simple shot of an over head light bulb getting splashed with blood will have Deadite fans grinning from ear to ear.

Evil Aliens is what the recent blockbuster Grindhouse aspired, and failed, to be- a return to old school, no-nonsense, trash cinema. Whereas Grindhouse felt forced and manufactured, Evil Aliens is genuine and satisfying. Evil Aliens is sick and twisted but possesses a wicked sense of humor. The filmmakers clearly didn't have a lot of money, but the money they did have was used well. The special effects and makeup in the film are well done, although some of the CGI could look better. The script is smart, with many nods to other genre films, including The Evil Dead, Dead Alive, Night of the Living Dead, Bad Taste, and Freak Out. The movie is FULL of fun moments like the three detailed above. The director/writer, Jake West, clearly loves the genre and his film plays out like a wish list any horror fanboy might have written. Evil Aliens is a labor of love, and I loved it right back.

Bottomline: Evil Aliens is definitely not for the uninitiated or those without a sense of humor. For those true B-Movie fans out there, do not miss this one. It's an exercise of excess and one hell of a ride. It's out on DVD already, so check out your regular haunts and get a copy ASAP.