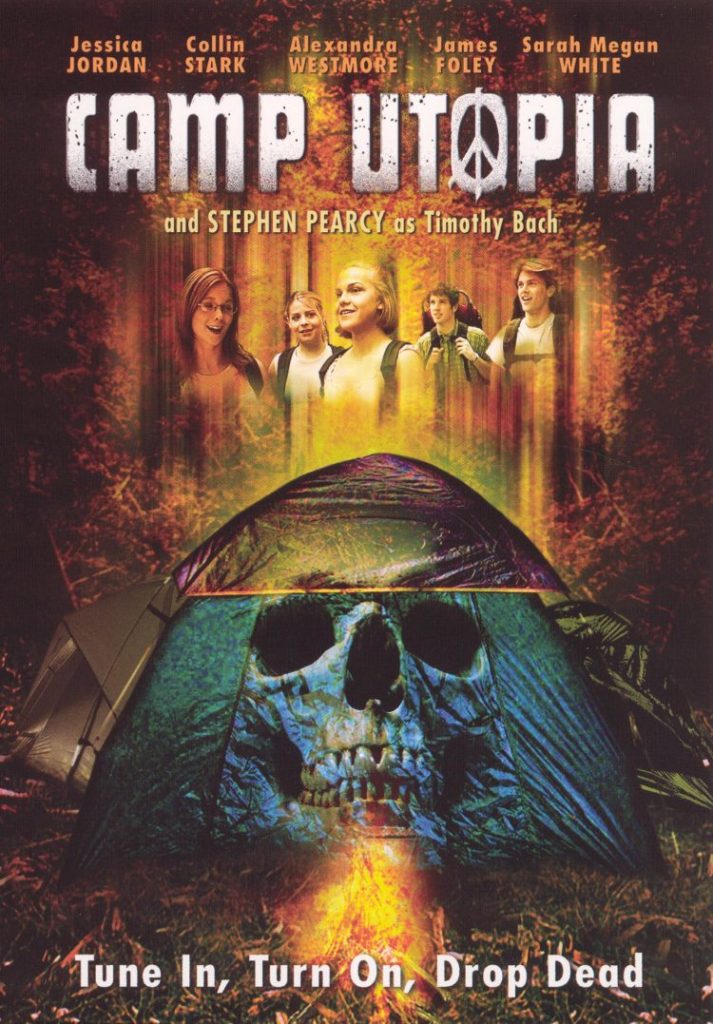 Released in 2002, Camp Utopia is a low budget slasher film centered around a group of five teens on a camping trip. The movie begins with a flashback, laying the ground work for the history of the the titular camping grounds. The name Camp Utopia refers to a hippie commune that existed somewhere in the backwoods of California during the 1960's. Their free-love community was led by a Manson-like, former rock star named Timothy Bach (played by Ratt frontman, Stephen Pearcy). Together, they all lived at Camp Utopia as a group of free spirits, reveling in a culture with its foundations firmly rooted in the indulgences of sex, alcohol, and pills.

As the legend goes, Bach takes a hit of some bad acid one night, prompting him to embark on a murderous rampage. His first victim is a random hippie girl with whom he was engaged in the physical act of expressing one's love for another. Ahem. Sex. The way the scene is presented, I'm not sure if it was truly the bad acid that caused Bach to lop off her head with a machete; it may have been the fact that, by all accounts, she was merely a lousy lay. At any rate, the killings don't end with the girl, as Bach takes the machete (and her head) back to the camp proper and hacks up the majority of his followers. After he's done, Bach takes his head and machete and disappears into the woods. NEVER TO BE SEEN AGAIN!!

Did I mention day trading is a recurring topic of conversation throughout the film. Yeah. To be fair, there's actually two topics of conversation that the guy characters in this film alternate between: day trading and sex. The female character's dialogue isn't much better, as their choice of topics seems to switch back and forth between being catty bitches and sex. Now I know what you're thinking; isn't this a horror movie cliche that, being the B-Movie Geek, I should be rejoicing and celebrating over? While the short answer is yes, I much prefer everything in moderation. When your characters are incapable of broaching any subjects other than those centered around the penis and the vagina it starts to get a bit tedious for the audience. After about five minutes I get it. They're teenagers. They like sex. Let's move on, shall we?

The lead female character, Bitchy Cheerleader (Jessica Jordan), decides to enforce a strict no cell phone policy on the trip in order to distract the guys from their stocks long enough to sex the girls up. As if that were really going to be a problem for this particular group of characters. This, of course, conveniently places the group in the middle of nowhere with no way of contacting the outside world for help. Really quite brilliant when you're heading out to the cursed camp grounds of a legendary mass murderer whose body has never been found.

Oh yes, did I mention that the kids are quite aware of the tales of the Camp Utopia bloodshed? Well, they are! Their first night in the woods the lead male, Bizzaro Kevin Bacon (Collin Stark), relates the tale of the massacre to the others as the sit around the campfire. From a story perspective, this sequence is meant to inform the New Girl character of the local legends. From a filmmaking perspective, this sequence is meant to inform the audience of the local legends. The only problem is, they already showed us everything that happened in the flashback sequence that opened the film. Even worse, all the footage they use to overlay the campfire story is take directly from that flashback sequence. Oh joy, the filmmakers get to pad out their hour and twenty minute run-time by showing me the same footage twice!

The tempo of the film is also a bit off from your typical low budget slasher. Very little time is spent on the kills or the sequences leading up to them. Outside of the flashback at the beginning, there are no deaths until over forty minutes into the film. Instead, the audience is treated to rather surprising amount of nudity from the relatively small, unknown female cast. There's nothing that particularly stands out about any of the nude sequence except for the sheer number of them. Almost all of the female actresses in the film go topless at one point or another. I'm not exactly complaining, but it seems like the nudity is just there to help pass the time until something actually happens.

As hard as I'm being on this film, there's actually quite a bit here to like. While I'd have preferred that the characters had been less two dimensional, this is a fault of the writing not the actors. All of the acting in Camp Utopia is actually pretty good for a film of this type. The comic relief character, Ranger Rogers, is a bit over the top, but is played well by Adam Minarovich. His humorous and lecherous antics serve well to identify him as the Red Herring of the proceedings. New Girl (Alexandra Westmore) in particular does a commendable job with some of her later scenes that might have come off much hokier if not for her performance. While I may not have been impressed with the dialogue, the writing involving the story does eventually do some interesting things as well, which I won't spoil here. Let's just say that the sequence in which the Last Girl discovers who the Slasher is (the identity of whom is telegraphed a bit much for my liking) plays out like it usually does, but then we get another fifteen minutes of story that also happen to the film's strongest. Although there's nothing unpredictable or particularly original in the content of this last section of the film, the writers deserve mention for following a story path that I didn't expect them to take.

The Bottomline: Camp Utopia is a solid low-budget title that will appease most fans of the horror and exploitation genres. The movie suffers from poor dialogue and timing issues, but still manages to be enjoyable. If you like direct-to-video titles, you might do well to give Camp Utopia a look.