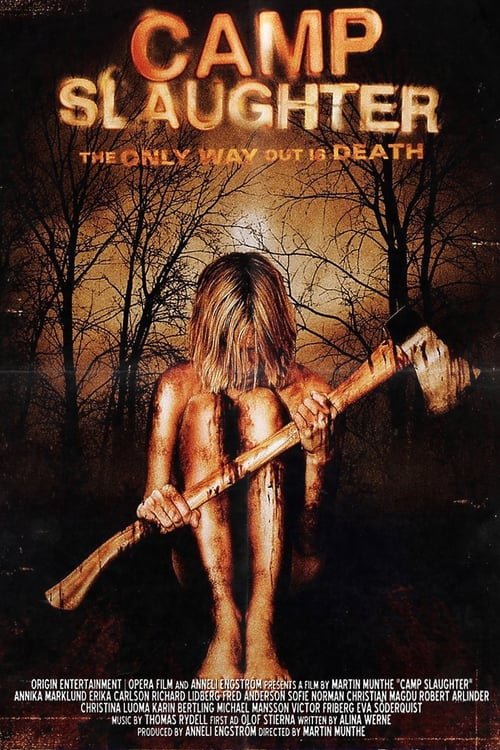 There are a lot of low budget horror films where kids at a camp get cut down in creative ways for breaking the various rules of slasher lore. Sure, the slasher sub-genre can be repetitive as hell, but isn't that really sort of the point? There's a certain comfort in the slasher formula. The films are just as much about rooting for the villain as they are about hoping that the protagonists survive. As I've mentioned before, part of the joy of these films is discovering just how these films deviate themselves from the expected story beats, whether just by creative death sequences or something more involved.

With that in mind, Camp Slaughter (AKA Camp Daze) is a pretty creative entry into the over-saturated slasher market. The screenwriter, Draven Gonzalez, clearly had the beginnings of a unique and fun plot when the project began. The story starts like any slasher flick, with a group of college-age students on a road trip. They manage to break down close to Camp Hiawatha, a standard sort of summer camp filled with your usual assortment of counselors and teenage campers. When kids start turning up dead, it quickly becomes apparent that something is amiss. Our lead characters band together and manage to survive the night of terror- only to wake up the next morning to find everyone at the camp is safe and sound.

This is where the film is at its most interesting. Our protagonists quickly learn that they are stuck in a sort of Groundhog Day time warp. Everyone at the camp is doomed to relive their final day over and over again, cut down at the hands of the slasher ad infinitum. Worse still, some of the camp residents seem to be aware of their fate, but are helpless to stop it from occurring. The main characters come from a time and place similar to our own, and are key to finally putting the spirits of these doomed teens to rest. Having main characters from the modern age is a fun idea and allows the movie to break the fourth wall without just shamelessly winking at the audience. The premise is Camp Slaughter's greatest strength.

Unfortunately, the rest of the film pales in comparison to its imaginative plot. The script itself is a mess of awkward dialogue, made worse by poor performances pretty much all around. This is a self-feeding negative loop, so its hard to know if the script writers or the actors are really to blame. Shot composition is passable, but overall quality looks like the movie was shot on video. This last really isn't a complaint, but know that low-budget means exactly that.

The make-up and general special effects are nothing special, but I did appreciate the elaborate set up to at least a couple of kills in the film. In these, the killer has left his victim strung up in some compromising position, hooked up to simple trap apparatuses that is sprung by the arriving help. These deaths really made my think about the typical slasher trope of the survivor girl stumbling upon the bodies of her deceased friends. This modification does the traditional cliche one better by ensuring the victim's final moments are witnessed by the protagonist. Although one could argue this has been played out by the Saw films for several years now, I'd like to see this idea expanded upon in other slasher films.

Ultimately, I did enjoy Camp Slaughter, but I feel like it fell victim to its own desire to be a smart slasher homage. The time travel premise is smart but needed additional thought and script-revision to be considered well-done. The intentionally cliched 80's characters are fun but one-dimensional and not particularly well played. There's little gore, there's zero female nudity, and the killer lacks a unique gimmick. Further, the reveal regarding the killer's identity is an overcomplicated twist that makes the film feel like it's trying to do too much. The story would have benefited by concluding the time-warp storyline it initially presents in a straightforward manner.

The Bottomline: There are a lot of mediocre slashers out there, but Camp Slaughter at least attempts to do something fresh and entertaining. You have to give points to the filmmakers for that. I hope they get another opportunity to do some genre work, hopefully with a larger budget and reduced scope. Worth a rent from Netflix for slasher fiends, but other genre-hounds may want to skip this one.