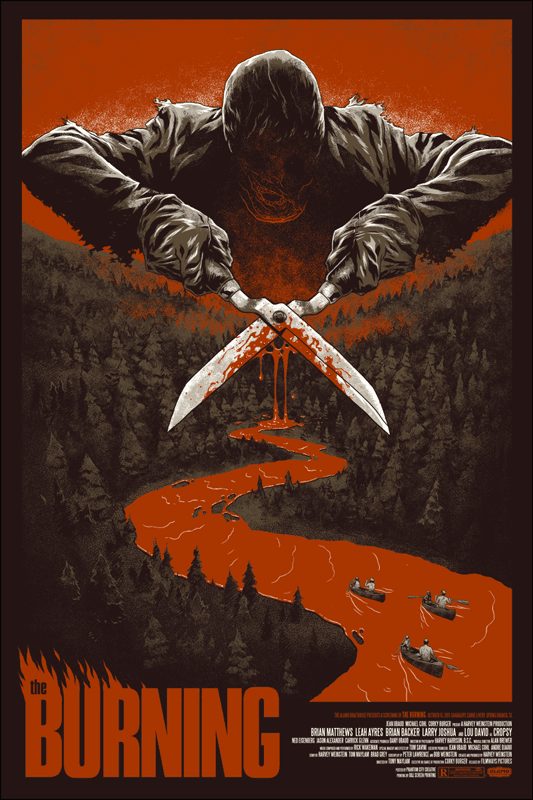 Today we mark our first foray into the wide wilderness that is old school horror. On the chopping block is the oft whispered about slasher flick, The Burning. There is a lot of history tied to this film, and was one of many films banned by the British Board of Film Classification in the mid-1980's. It was the first film produced by Harvey Weinstein whom would go on to create Miramax and The Weinstein Company. It starred then unknown talent Jason Alexander, Fisher Stevens, and Holly Hunter. The special effects were done by industry great Tom Savini, just following his work on the original Friday the 13th.

The film has garnered a bit of notoriety over the years, thanks to an especially brutal raft massacre scene that takes place in broad daylight. The notoriety has no doubt doubled for the simple reason that the movie has long been out of print, rarely even playing on late night TV horror fests. As such, although I've heard great things about this film, I'd never been able to view it for myself. However, thanks to Anchor Bay and the glorious technological advances afforded us by DVD, The Burning is available for consumption once more.

The film takes place at a common 80's slasher setting, a summer camp in the middle of the woods. We meet a group of young boys that wish to seek revenge against the crusty old camp caretaker, Cropsy. Okay, so the caretaker isn't that old or crusty, but I like the ring of it. At any rate, the revenge prank goes severely south and old Cropsy ends up severely burned, hence the title of the flick.

Cut to 5 years later and the horribly disfigured, shadow dwelling, trench coat wearing Cropsy is released from the hospital. We're not exactly sure why the hospital is releasing this particular patient as there appear to be some unresolved psychotic tendencies. In fact, the doctors can clearly be heard saying via voice-over "We know you still resent those kids for what happened, but try not to think about tracking them down one by one and murdering the little bastards." Okay, so that's not the line word for word, but it might as well be. At any rate, Cropsy gets out of the hospital and kills a hooker. Not exactly sure why, but hey, that's show business for ya.

Next we jump to the summer camp and get acquainted with a new group of kids, one of which is Jason Alexander (with HAIR!). Also, one of the kids responsible for burning the caretaker five years before is now a counselor at the camp. More importantly, the camp is apparently now co-ed because there is a lot of old fashioned 80's T&A on display. Cropsy quickly find his way to the camp and gets with the dispatching of these wicked, sex crazed young folk. The first set of boobs (Not the prostitute's. Go figure) make their entrance around twenty minutes into the film, concurring with the film's first red herring.

From there, we have approximatey forty more red herrings in a row. Seriously. The first death (not counting the prostitute) occurs about 45 minutes in. In this scene, we're treated to several sequences of full frontal nudity as teenage girl wanders the forest looking for her clothes which were stolen while she was skinny dipping. Whew. Do not try such long and convoluted sentences at home, kids. This sequence deserves some recognition as it contains more nudity than most other films from this era. Props.

The next thing of interest that occurs is the aforementioned raft massacre scene. A group of 6 or so kids attempting to escape via raft are cut to ribbons by the shear-wielding maniac. Again, some recognition is deserved as no other 80's slasher with a scene containing this level of unflinching brutality comes to mind. Also, the fact that this attack happens in broad daylight, with a group of character that hasn't done something stupid like split up, shows smart, inventive writing on the part of the screenwriter.

The third defining moment of this film is the climax, which consists of a fairly boring, overly-prolonged chase sequence. The reason this is a defining moment is because the character is peril is not your slasher standard teenage girl. No, there are two characters in peril and they are both male. I'm not sure if the writer was consciously avoiding genre cliches or not, as I'm not sure a strong genre formula had been established at the time this film was made. Either way, again, props.

That's not to say the movie is above criticism. The film takes too long to get to the killing. There's an abundance of day-for-night shots so you can never tell what time of day it's supposed to be in the film. Some of the kills could be call repetitive (not by me though). None of the characters are particularly likable. You only see the horribly burned caretaker for a grand total of 30 seconds. The climactic chase is boring. Etc.

All that said, if you're a gore hound or a slasher junkie, it's worth checking out. There's a lot of history, some real smart scripting, and the raft scene is something no horror fan should go without seeing (although, in retrospect, it's not all that gory). Anchor Bay has done good in resurrecting this film. I can only hope some other wayside fallen gems can get the same treatment in the future.

The Bottomline: If you're a genre fan, consider this film mandatory viewing. For casuals, you might be better served rewatching Friday the 13th. Either way, recommended.