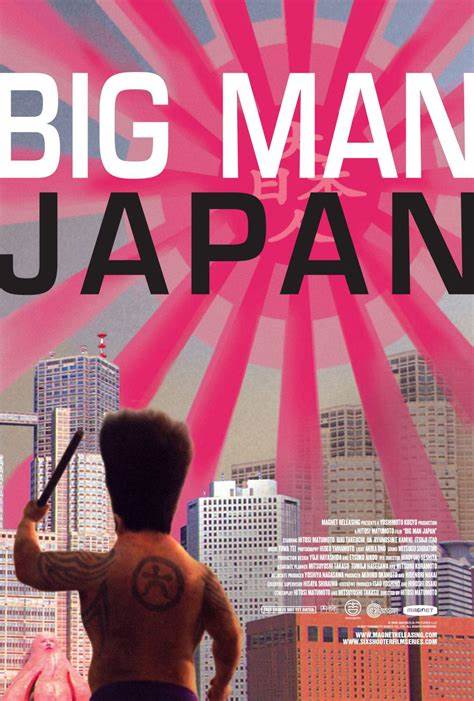 The kaiju or giant monster genre has been rather stagnant as of late; I don't think I've seen a decent monster movie since Korean film The Host graced the shores of the United States in late 2007. That being the case, when I first saw the initial trailers for today's film Big Man Japan, I was intrigued. A itch that had not been scratched in some time suddenly flared up and demanded satisfaction be rendered unto it. It's been about a year since I first caught wind of this project, and now thanks to a wide DVD release I have been able to partake in its cream-filled goodness.

Big Man Japan is an interesting agglomeration of what might have been several different films. The main portion of the film's first two acts consists of mock-documentary footage featuring an unseen filmmaker and the subject of his work, a seemingly average Japanese man named Dai-Sato. The documentary begins by introducing us to Dai-Sato is employed by the Japanese government. He is the lone employee of a Homeland Defense-like branch of the government. These interview-style scenes are rich with humor that is all delivered completely deadpan. Although this was not a problem for me personally,  people who do not appreciate this style of humor may find these scenes slow moving or even boring. This is unfortunate because they make up the bulk of the film's runtime.

The movie quickly establishes that Dai-Sato does not have a lot going for him in his daily life. He is underpaid, divorced, and seemingly despised by the general public for his job. The exact nature of his work is not immediately revealed but before long a mysterious phone call sends Dai-Sato into action. He rides his scooter down to the local power plant where the film crew is not permited to follow. Although we do not see what happens at the power plant at this time, the effects of what occurs there is immediately apparent. In the next scene, a 30-meter tall Dai-Sato, wearing only a skimpy pair of purple briefs, marches into Tokyo to do battle with a giant monster wrecking havoc there.

Dai-Sato is the heir to the Big Man Japan lineage, the last surviving member of a long line of monster battlers. Like his father and grandfather before him, when a giant kaiju monster attacks Japan, the government calls upon Dai-Sato who grows to gargantuan size to do battle with the aggressor. The process by which Dai-Sato is able to grow in size is revealed to require running high electric current through his body. Humorously, the contact points for the electrical current are Dai-Sato's nipples, which he claims is very important due to their inherent sensitivity!

The monster designs in this film are wildly imaginative. The computer generated effects lend a very unique style to each of the designs which are more visually interesting than any other kaiju in recent memory. Also, because they are completely CGI, the monsters do not have the same motion restrictions as monster designs based on a man in a rubber suit. I only wish this freedom of movement was better capitalized on in the battle sequences and were used to deliver fights unlike anything we've seen before. Instead, most of the fights degenerate in clubbing and various simple wrestling moves. Another interesting facet to the monsters' designs is that most of the monsters have actors' faces superimposed onto them. At first I thought this was an odd artistic choice, but the humor these facial expressions allow for quickly made the choice an agreeable one. The facial expressions of the Leaping Monster in particular made me chuckle aloud on several occasions.

As the movie progresses it becomes readily apparent that the position of being Big Man Japan is not particularly glamorous. There was a time when the Big Man was a much beloved and renowned national figure, but those times have long since past. His grandfather used to fight monsters on prime time television to great acclaim, but due to decreased ratings Dai-Sato is now relegated to late, late night television. Although he performs a very important function in defending Japan from monstrous threats, the public isn't interested in watching an overweight giant wrestle dangerous creatures into submission. In modern times, Big Man Japan has become a joke.

The story of the film begins to pick up when Dai-Sato begins to make a series of poor decisions, including accidentally killing a monstrous yet harmless baby infant. Popular support for the Big Man further dwindles when he is defeated and runs away from a muscular, bright red, devil-like monster. There is some duality to the film's proceedings as Dai-Sato's everyday life deteriorates into depression, even as his public Big Man persona is rendered an ever-greater social outcast. The movie comes to its climax as the Devil Monster again attacks the city and the government has no choice but to call upon the Big Man to defend Japan one final time.

Given that I really enjoyed this movie, I don't want to further spoil the ending or give away any more of the general plot points. Unfortunately, I feel compelled to mention that the final act degenerates in more ways than one. The very final sequence pitting Dai-Sato against the Devil Monster begins with the film's standard CGI effects but then changes to what can only be intentionally-bad rubber suits. The tone of the film also shifts away from the deadpan humor we've grown accustom to and moves more towards heavy-handed, audience winking territory. In regards to the special effects, I would say that it seems like the production simply ran out of money, but the rubber suits and model buildings no doubt cost just as much to build, implying that this change was a creative choice. I understand the intended homage, as rubber suits have long been a steadfast adornment of the kaiju genre, however the changes are jarring given the continuity of  the rest of the film. In regards to the comedy, I don't doubt the shift will bring chuckles to some viewers but many others will be left scratching their heads. With the change in tone, the story regarding Dai-Sato's status as a social pariah is discarded and a suitable resolution to that conflict is never presented.

The Bottomline: Big Man Japan is a fun foreign film with some crazy ideas. If you're in the mood for a fun monster romp with some social commentary, this could be just the movie that you're looking for. Unfortunately, a comparatively weak final act prevents this film from attaining the greatness that the setup promises. Still, you've probably never seen a film quite like Big Man Japan. Give it a shot.