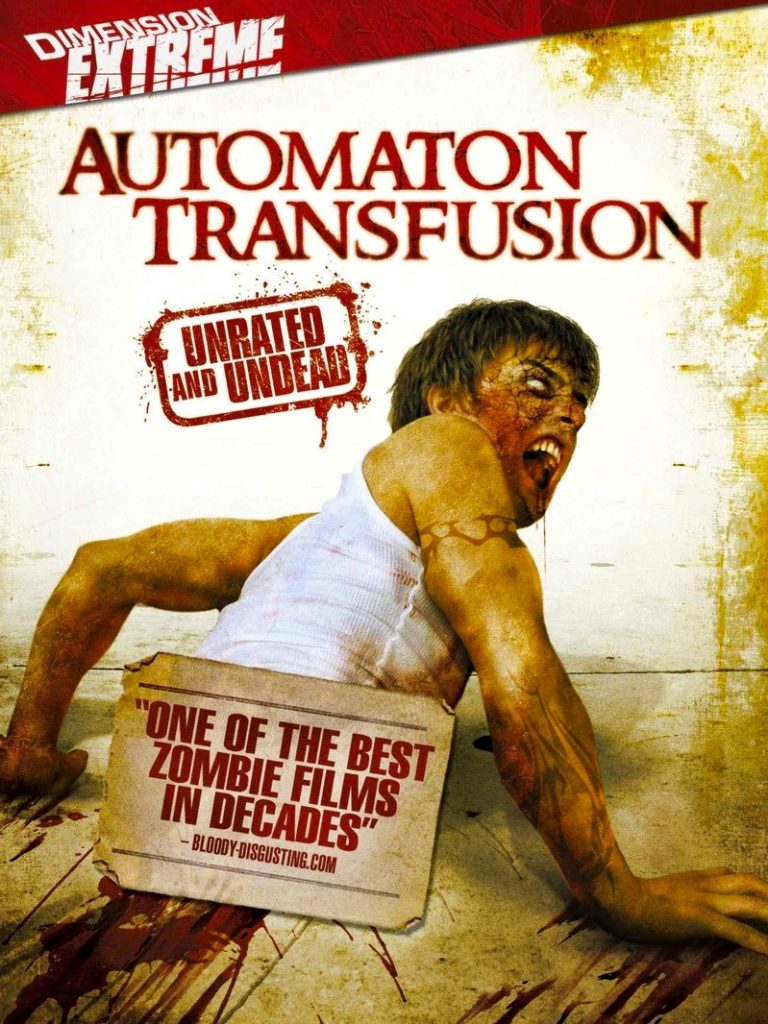 Unsurprisingly, the answer is somewhere in between. Much like the aforementioned Blair Witch, there is a lot of hard work and love evident in this film. The director has done a commendable job making a Hollywood worthy film on a $30,000 dollar budget. The majority of the acting is well done and the the makeup effects beat anything I saw in the theater in the last twelves months (Rambo excluded). Also much like the aforementioned Blair Witch, the movie has a million-some-odd flaws that critics will pick up on, harp upon, and tear the movie a new one over. And to be honest, the critics won't be wrong.

Automaton Transfusion is likely to suffer most from the hype surrounding it. Hard to please independent fans may judge it harshly for its perceived mainstream acceptance. This aside, Automaton Transfusion is truly one of the better independent horror films of recent memory, but that fact doesn't mean your average, theater-going, six pack Joe is going to appreciate it. The film quality is below digital, there aren't any explosions, and Jessica Alba or Sarah Michelle Gellar aren't in it. Most people are going to look at it and not see what the big deal is about. The movie is fantastic considering it was made for $30,000, but most people aren't going to know that factoid or, let's face it, care.

With all of that out in the open, I'd like to say that I found Automaton Tranfusion wickedly entertaining for the majority of its runtime. The story follows a three high school students, portrayed by actors who actually looks like they could be in high school!!!! They head out to the nearby city to see a rock concert, but when they arrive they find the city is deserted. The proverbial shit quickly hits the proverbial fan and they find themselves on the run from a massive throng of fast, intelligent zombies that have the unique ability to sniff out us living warm-bloods no matter where we hide.

The zombies, if you can call them that, were the biggest disappointment I had with the film. It's not that they aren't well realized. They are, and the majority of them have some pretty decent make up to boot. They're certainly vicious enough, rapidly descending on survivors and quickly tearing them into pieces. Mostly I'm just nostalgic for old fashioned slow-moving, overwhelm you with sheer numbers and inevitability-type zombies. I suppose I can't hold that against the film though. I did, however, have these thoughts as I watched the movie:

With the exception of one scene of exposition near the end of the film, its pretty much wall to wall action for the 75 minute runtime. The blood runs freely although never in ways that are all that surprising or memorable. When the movie comes to a screeching halt with the words "To Be Continued" splashed up on the screen, you're likely to find yourself wanting to see more. I know I did.

The Bottomline: Automaton Transufsion is not without its plot holes and technical mishaps. It is a compentantly made film that is worth a rental for gore hounds looking for a fix. Writer/Director Steven C. Miller could be one to watch for if he ever gets his hands on a real budget. I'm definitely looking forward to the sequel.

I'm vaguely disappointed that the torn in half, crawling zombie on the uncensored DVD box cover is nowhere to be found in the film itself. Oh well.