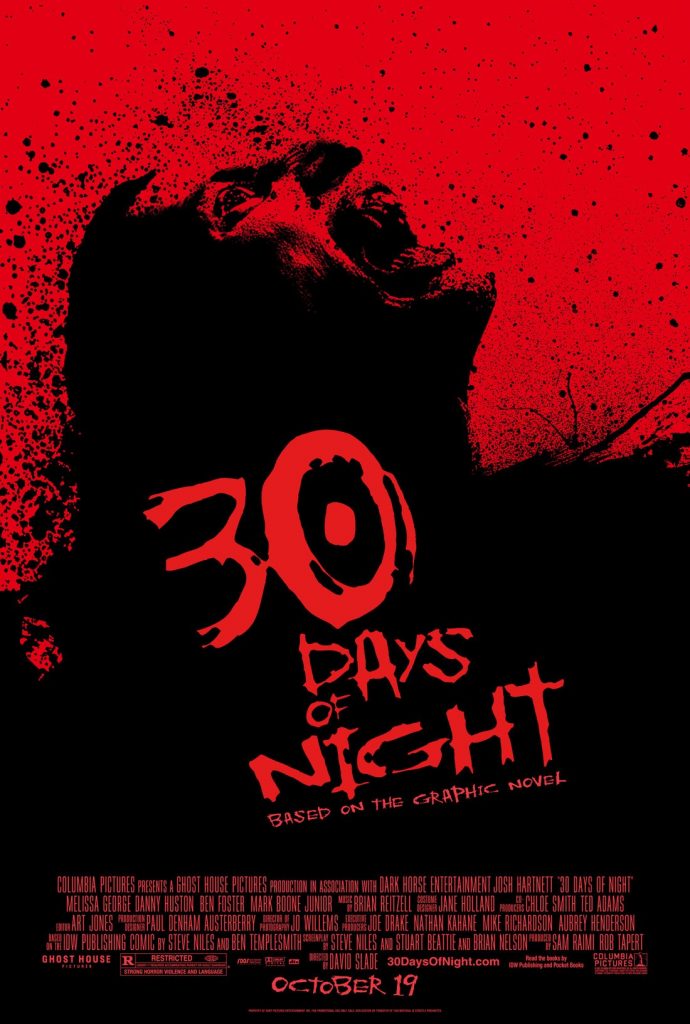 Tonight on the chopping block is the relatively recent big-Hollywood DVD release of 30 Days of Night. The flick is one of the better mainstream offerings to come down the pipeline in awhile and is a flick that any horror fan should probably check out. The movie covers a fantastic premise: A small group of bestial vampires descend upon a small town in Alaska where the sun sets, not rising again for 30 days. The vampires have the free run of the small town population, able to feed at will without the need to worry or hide from the sun. The movie follows a group of survivors trying to outlast the night.

For a Hollywood movie the level of brutality on display here is simply amazing. These aren't your grandmother's Bela Lugosi vampires. These are bestial, ravenous, guttural beasts of the night. They're not going to just drink your blood, they're going to rip you limb from limb and leave you screaming. Over the course of the film we see several beheading, the slaughtering of dogs, and a brutal ax-delivered death of a little girl turned vampire. The level of gore isn't going to impress hardcore indy gore-hounds, but for a wide release movie, you couldn't possibly expect anymore.

The next thing I noticed watching the film was the cinematography, which at times was simply gorgeous. Some of the scenery looks like a living painting, a look no doubt intentional due to the comic book origins of the material. The use of CGI enhancement gives an otherworldly quality to the material, making it jump off the celluloid. I've included an example of this below, but you really need to see the pictures in motion to get the full effect.

Okay, so enough praising. The movie isn't perfect and I don't want you to read this thinking it is. The acting can be a bit rough at times, especially from lead male Josh Hartnett. I understand they were trying to portray a multidimensional lead character but he just comes across as effeminate. The film definitely would have benefited from an actor capable of injecting a bit of testosterone into the proceedings from time to time, especially during the climatic fight scene. As is, the climatic battle between Josh Hartnett and the leader of the vampire pack comes off as sad and pathetic, a far cry from the epic battle you can tell the filmmakers were going for. Having the worst piece of laugh-inducing special effects in the movie cap off this fight didn't help much either.

There's also a serious problem with time progression in this film. At times, they simply throw a subtitle up on the screen indicating how many days are left before the sun rises. The movie skips from Day 1 to Day 9 to Day 29, or something like that. When this happens the scene breaks feel forced. They don't flow naturally, and they decrease suspense.

The Bottomline: 30 Days of Night is an impressive first offering from Ghost House Productions. This level of horror should be consistently seen in theaters across America. The film isn't perfect, but it's a lot of fun and, hey, it beats watching another J-horror remake (looking at you, Shutter).